The Nigerian Air Force (NAF) says it has graduated another batch of 30 officers from the Young Officers’ Course (YOC) at the Military Training Centre (MTC) in Kaduna. 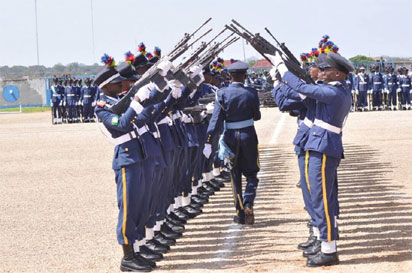 Director of Public Relations and Information, Air Commodore Ibikunle Daramola, disclosed this in a statement on Saturday in Abuja.

Daramola said that the YOC was a three-month course aimed at developing the capacity of officers of the rank of Flying Officer, for future leadership tasks.

“During the YOC, the officers were groomed in subjects such as General Service Knowledge, Staff Duties, Asymmetric Warfare Principles and NAF Base Defence Concept, among others, to enhance their effectiveness and efficiency,” he said.

He said that during at the graduation, Chief of Air Staff (CAS), Air Marshal Sadique Abubakar, urged the officers to utilise their new knowledge to enhance their performances in subsequent deployments.

Abubakar was represented at the ceremony by the Air Secretary, NAF Headquarters, Air Vice-Marshal Gali Abdulwahab, according to spokesman.

The CAS was quoted as advising the officers to justify the resources invested in them by carrying out their duties diligently and professionally at all times.

Daramola said the highpoints of the ceremony included presentation of certificates to the graduands and awards to those who had distinguished themselves during the course.

He said that Flying Officer O.O. Ilesanmi was among the award winners who received the CAS Award for emerging Overall Best on the course.

“It is noteworthy that the current NAF leadership has continued to focus on all aspects of training at home and abroad towards improving professionalism to meet the security needs of the nation,’’ he said.