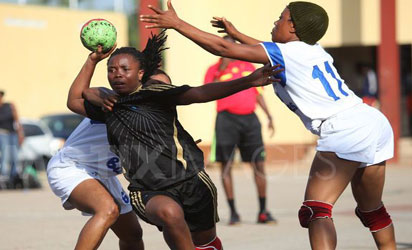 FAMOUS Handball club in Nigeria, the Imo Grasshoppers maintained their unbeaten run in the on-going Prudent Energy Handball league at the Mobolaji Johnson Sports Complex, Rowe Park in Yaba, Lagos as they overpowered Delta Queens 31-21 to brighten their chances of clinching the trophy in the Women category.

Meanwhile Edo Dynamos yesterday defeated Owena Queens of Akure 30-22 in the opening fixture of Day Six in the women event.

The Akure-based side parading a youthful side in a highly entertaining game could not match the Edo side featuring ageing and experienced players as they were outsmarted.

The match up between D Defenders of Abuja and Owena Kings ended in favour of the Abuja team who won 37-33 in the round-robin league.

Prison Key Boys however, lost 20-27 to the Kano Pyramids in an equally exciting duel that got the crowd thrilled all through the duration of the game.

“Our defeat was as a result of fatigue because we played a match just yesterday (Sunday). The next thing is for us to have confidence in ourselves and believe that we are going to win our subsequent matches by the grace of God.”

“The girls need to be encouraged and have to rest well so that they can recover fully for their next game. In this championship, we were not opportuned to have our best legs, as many of them are students, either sitting for their exams or doing one thing or the other,” he said.

However, coach Aaron Okojie of Edo Dynamos, attributed his team’s victory to the tactics he employed for the game.