NIGERIA’s flagbearer Enyimba Football Club of Aba have virtually won all available trophies on the continent but are desirous of annexing the Total CAF Confederation Cup that is yet to grace their impressive trophy cabinet. 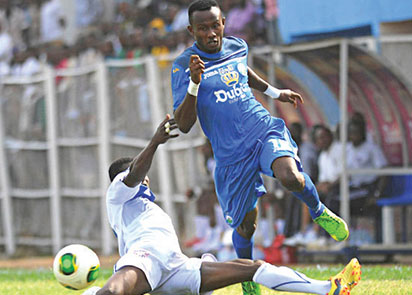 Indeed there is a renewed expectation after the two-time African champions drowned Rayon Sports of Rwanda with goals in the quarter-finals, finishing with an impressive 5-1 aggregate to set up an exciting semi-final tie against former African Champions, Raja Casablanca of Morocco.

The first leg of this eagerly awaited tie is slated for Enyimba International FC Stadium in Aba  on 3 October while the reverse fixture will be held at Complexe Mohammed V in Casablanca on 24 October.

Meanwhile, the transformation of Enyimba from a provincial club to continental superpower always elicit interest  even more so when  they are the only remaining  Nigerian club still in the hunt for continental honour this year.

Formed exactly 42 years ago, Enyimba were the first Nigerian club to win the CAF Champions League trophy in 2003 after 39 years of failure by several clubs including Rangers International of Enugu and Shooting Stars Sports Club of Ibadan to win Africa’s top club competition and  they successfully defended the crown in 2004.

“As far as Enyimba is concerned, we have a very rich history both in Nigeria and Africa because we have won everything winnable,” Felix Anyansi-Agwu who is almost two-decades in charge of Enyimba as chairman told CAFOnline.com

“ Between 2000 and now that I’ve been  chairman ,we have won the  Nigeria Professional  Football League  (NPFL) title  seven times and the Federation Cup four times aside many other trophies  and even in years we failed to win something we had finished in second or third position in the league.

“In Africa, we won the CAF Champions League in 2003 and 2004; we have also won the CAF Super Cup twice in 2004 and 2005 and the only trophy left for us to win on the continent is the CAF Confederation Cup.

“We know that Nigerians want us to win this elusive CAF Confederation Cup. This is possible through hard work and commitment and God’s willing, we shall  win this important trophy this year.”

Enyimba have relied on their pedigree in  the race this season  by dispatching Beninese side Energie FC  5-2  on aggregate in the First Round; before edging out  Bidvest Wits of South Africa in the Second Round on the away goal rule after they  both stalled at  1-1 over two legged encounters.