By: Amebo
In: Sport
Lionel Messi has retired from international duty after missing in a penalty shootout as Argentina lost a fourth major final in nine years.
“For me, the national team is over,” he said after defeat by Chile in the Copa America final. “I’ve done all I can. It hurts not to be a champion.”
Messi, 29, has won eight La Liga titles and four Champions Leagues with Spanish side Barcelona.
But his only major international honour is Olympic gold at the 2008 Games.
As well as losing two Copa America finals on penalties to Chile, Messi was in the Argentina side beaten 1-0 by Germany in the 2014 World Cup final.
The forward, who was been awarded the Ballon d’Or five times, was also on the losing side against Brazil in the 2007 Copa America final.
“It’s been four finals, I tried,” added Messi, who made his debut for Argentina in 2005 and has played 113 times for his country.
“It was the thing I wanted the most, but I couldn’t get it, so I think it’s over. 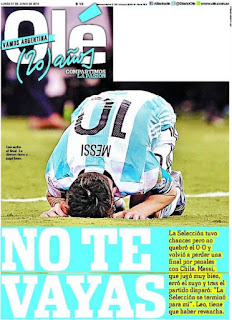