A United States team packed with NBA stars will begin its bid for an unprecedented third Basketball World Cup title in a row with a clash against debutants the Czech Republic.

Team USA, who have named the likes of LeBron James, Kevin Durant and Stephen Curry in their 2019-2020 roster, will be strong favourites to retain their crown at the August 31-September 15 showpiece in China. 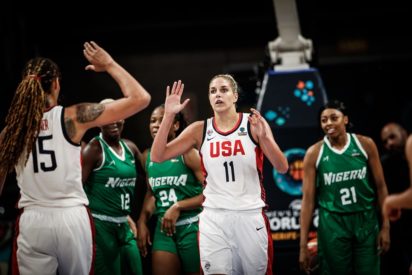 Saturday’s draw in the southern Chinese city of Shenzhen pitted a biggest-ever 32 teams from five continents and placed the USA in Group E in Shanghai alongside the Czechs, minnows Japan and Turkey — the team the USA beat in the 2010 final.

Shanghai and Shenzhen are among the eight host cities, along with Beijing, which will stage the final.

“I believe it is going to be a great, competitive tournament,” said the 40-year-old, who was given a rousing reception from the 8,000 crowd at the draw and had his name chanted on several occasions.

“It’s a real sense of honour to be playing for your country.

“At the start of the game you hear your national anthem being played, you see everyone in the arena with their flags, representing their country and colour.

“It’s extremely special and different from playing for your club teams.”

Serbia, beaten by the USA in the final in Madrid in 2014, are in Group D with the Philippines, Italy and Angola.

France, ranked third in the world behind top-rated USA and then Spain, are in Group G with the Dominican Republic, Jordan and European rivals Germany.

Boris Diaw, who took bronze with France at Spain 2014, said that another title for the USA — who are also the reigning Olympic champions — was not a foregone conclusion.

“I think a lot of teams can pretend to be able to go all the way to the final,” said Diaw, who spent 14 years in the NBA.

There is an added incentive for teams at this World Cup, with seven spots at the Tokyo 2020 Olympics up for grabs.

The top two from each group will go into the second round in China.