After an impressive boxing career, it appears Mike Tyson has decided to let loose as he heads deeper into his 50s. 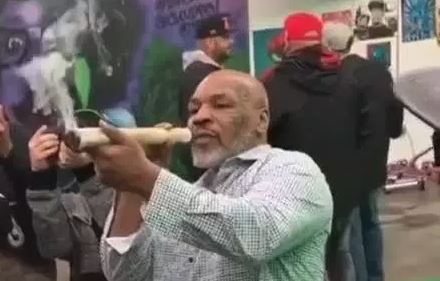 It’s not a one off for Iron Mike, as Tyson actually owns a 40-acre cannabis ranch close to California’s Death Valley, which he decided to open after the US state legalised weed.

Tyson even admitted to smoking marijuana before he beat Andrew Golota in 2000, which he won after Golota failed to answer the bell for the third round.

Tyson scored a technical knockout, however the decision was later changed to a no contest after testing positive for the drug after the fight.

He says that he has taken cannabis all his life, but claims the Golota fight was the only time he had smoked weed and fought, saying it ‘didn’t affect me. It affected Golota.’

Tyson, a strong believer in the healing properties of the drug, even has his own school for prospective weed growers called ‘The Tyson Cultivation School.’

He is also looking to advance research of the benefits of marijuana, specifically CBD, which has no psychoactive properties and is use to treat inflammatory ailments.

It also stands to be a lucrative business for Tyson, with the sales of legal marijuana estimated to reach $24.5billion by 2021, according to Forbes.

And Tyson certainly didn’t look to be in any pain as the 52-year-old took multiple drags on the giant joint.