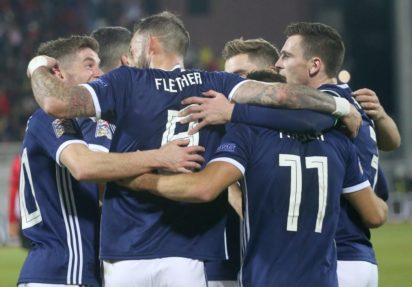 Alex McLeish’s side needed victory to leapfrog the visitors to the top of Group C1 but former Celtic midfielder Beram Kayal stunned the home support in the ninth minute when he curled in a shot from distance.

Celtic winger Forrest, who had scored his first two Scotland goals in the 4-0 win over Albania on Saturday, notched twice in the first half before grabbing a third in the 64th minute from close range with another assured finish.

Midfielder Eran Zahavi reduced the deficit with a powerful drive in the 75th minute and in a nervy finish only a great save from Scotland goalkeeper Allan McGregor denied the visitors a late equaliser.

“We played some great football for an hour,” McLeish told Sky Sports. “We managed the game, I thought, particularly well.

“I’ve got to be absolutely proud of the guys — the way they played tonight, the way we played in Albania. There was a lot of great play out there. Special mention for James Forrest. Coming into the box as he did was just amazing.”

“Going one goal behind after 10 minutes took a lot out of the boys and we showed a lot of character,” he said. “It was credit to all the boys.”

Scotland finished with nine points from 12 and can park their play-off fixture until March 2020 and concentrate on the traditional European Championship qualifiers, with the draw made on December 2 in Dublin.