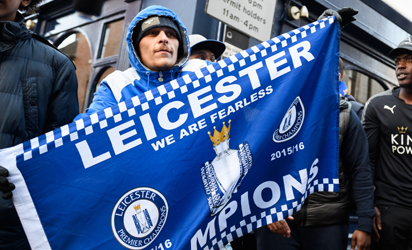 Leicester have confirmed their Premier League clash at Cardiff will go ahead on Saturday following the tragic death of owner Vichai Srivaddhanaprabha.

With mourners flocking to the stadium and the crash site cordoned off as investigators picked through the wreckage, Leicester had already postponed Tuesday’s scheduled home League Cup tie against Southampton.

But the club announced on Tuesday that they will make the trip to south Wales to face Cardiff this weekend.

A minute’s silence will be observed before kick-off at the Cardiff City Stadium and players will wear black armbands in Vichai’s honour.

“Leicester City’s Premier League fixture at Cardiff City this Saturday will go ahead as scheduled, as the club continues its tributes to its late chairman, Vichai Srivaddhanaprabha,” a statement read.

“An announcement on the rearrangement of the club’s League Cup fourth round tie against Southampton, postponed earlier this week, will be made in due course.”

Cardiff chief executive Ken Choo was respectful of Leicester’s wish to return to action seven days after the horrific accident.

“Following Saturday evening’s terrible events at King Power Stadium, the thoughts and feelings of Leicester City FC are at the forefront of our minds,” Choo said.

“As such, we will be offering our support to Leicester City in any way necessary in respect of this weekend’s fixture.”

The death of the charismatic Vichai has stunned the football world, with tributes pouring in from around the globe.

Ochanya: The law must take its course – Ortom

Vichai’s heavy investment after buying Leicester in 2010 transformed the unglamourous club into shock Premier League champions as 5,000-1 outsiders in 2016.

The 60-year-old was widely admired in Leicester for his charitable donations to the local community.

That warmth was reflected in the outpouring of grief following the news of Vichai’s death.

Vichai’s son Aiyawatt and widow Aimon walked through a sea of tributes from fans outside the stadium on Monday, including flowers, football scarves and Buddhist statues.

Aiyawatt was joined by the Leicester team, including striker Jamie Vardy, centre-back Harry Maguire and keeper Kasper Schmeichel, with the group pausing in reflection in front of the flowers.

Leicester have also opened a book of condolence in memory of Vichai in a marquee at the stadium, while the City Hall and County Hall will light up in blue this week to honour Vichai.

The Air Accidents Investigation Branch (AAIB) are still conducting their investigation into what caused Saturday’s tragedy.