Odion Ighalo will be aiming to score his second goal in three games at Tianjin TEDA – the club of his Nigeria teammate and captain, John Mikel Obi, when both teams clash in Saturday’s Chinese Super League (CSL) at the Tianjin Olympic Sports Centre. 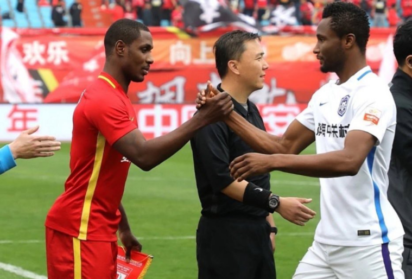 Nigeria international, Ighalo who has bagged 18 CSL goals in 24 games will also be eager to make it two wins in three games over Mikel’s Tianjin TEDA and also add to his tally this season.

Mikel on his part will be hoping to help Tianjin TEDA end their seven game winless streak in the CSL.