It has been four weeks of resilient onslaught against crime and criminality in Benue state since Mr. Ene Okon assumed duties as the new Commissioner of Police in charge of the state. 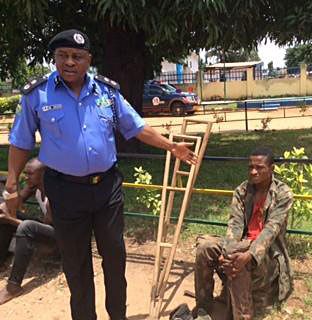 On assumption of office, Mr. Okon left no one in doubt as to his determination to rid the state of all criminal elements tormenting the nooks and crannies of the state.

Proudly showcasing his achievement within the period, the Commissioner of Police paraded a 25 year old armed robbery suspect, Aondowase Emberga who usually dressed in military camouflage alongside his five-member gang to torment and rob motorists and residents along the ever busy Makurdi-Lafia road.

While parading the suspects, Okon said that “the arrest followed reported cases of robbery along the Makurdi-Lafia road.

The Federal Special Anti Robbery Squad, FSARS, operatives deployed to the road to checkmate the activities of the hoodlums had an encounter with them few days ago at about 11pm leading to exchange of gunfire.

The team while combing the surrounding bush in the morning, arrested Emberga wearing military camouflage with gunshot injury on his leg.

“He confessed to be a member of the six man gang who dressed in military camouflage and had earlier engaged our security personnel. We are investigating the matter while our men are on the trail of others.”

The Commissioner added that a member of another gang was gunned down in an exchange of gunfire in Makurdi town following a distress call by robbery victims after which a pistol with two expended bullets and two cartridges were recovered from the dead robber.

He said the special operation within the period also led to the arrest of three suspects in Otukpo and the recovery of four firearms from the suspects.

According to Okon, operatives of ‘Operation Zenda,’ a combined security operation on stop and search duty arrested another five suspects along Adikpo-Ugbema road and recovered 378 live ammunitions of various calibers, a telescope, knives and assorted charms.

“The Zenda operatives also arrested Aondowaee Yese and Terhide Iorsase both of Ugbema in Buruku local government with two pistols, two live cartridges and a Honda motorcycle which they confessed to have snatched from a motorcyclist at gunpoint on Ugbema -Jato-Aka road.

“Also arrested yesterday with a locally made pistol was one Terungwa Tyowua. The suspect was trying to rob a female victim of her belongings when she raised alarm which attracted our patrol team.”

Also paraded was a four-man kidnap gang, led by a graduate of Industrial Physics, operating in Makurdi, the Benue state capital and its environs who were arrested by operatives of the state command in collaboration with a squad of the Inspector General of Police, IGP, Monitoring Unit.

The Commissioner who disclosed that the gang had overtime successfully carried out their nefarious acts in the state were nabbed while plotting to abduct a serving state lawmaker in the town.

Explaining how the command was able to burst the syndicate, the Commissioner said, “on September 26, 2018, operatives of the IGP Monitoring Unit from Abuja led by Deputy Commissioner of Police Ben Igweh in collaboration with the Federal Special Anti Robbery Squad, FSARS and personnel of our Command through intelligence led policing, arrested one Magudu Harris 36, of Shawon Ato Street behind Civil Service Commission, Makurdi.

“The suspect who is a graduate of Industrial Physics from a Makurdi based university (name withheld) is the gang leader of a 4-man gang terrorizing innocent residents of Makurdi the state capital.

“He confessed to have masterminded and executed the kidnap of a female Civil Defense Officer, while on her way from Church and one Mrs. Veronica Jirgba on September 20, 2018 and collected a ransom of N1million before her release four days later.

“Further investigation led to the arrest of other members of the gang, one Anyam Terhemen 34, of Idye Village, off Vandeikya Street, Makurdi. He is also a 2011 graduate of Psychology from another University based in Makurdi (name withheld) and 27 year old Paul Keghuur of BNARDA office also in Makurdi, who is the owner and driver of the gang’s operational Golf car with registration number Lagos CY 687 SMK.

“Frantic effort is being made to arrest a fleeing member of the gang, identified as Loho Caleb of Wurukum market Makurdi.”

The arrested suspects who acknowledged being involved in kidnap activities in the state however blamed the devil for their actions.

Mr. Okon further disclosed that the command had already identified a building in the North Bank area of the town where the suspects usually lock up their victims before collecting ransom adding that the structure had been marked for demolition.

He said, “the IGP Monitoring Unit as well as the Command has remained resolute in the fight against crime in Benue state because I am determined to discharge the mandate given to me by IGP Ibrahim Idris to ensure that Benue is crime free.”

He enjoined the people of the state to go about their lawful businesses without apprehension but report all suspicious persons or movements to the Police.

The Commissioner who pledged to confront incidents of crimes and criminality in all parts of the state headlong, appealed to the people to avail his command credible information that would help him succeed in his assignment.