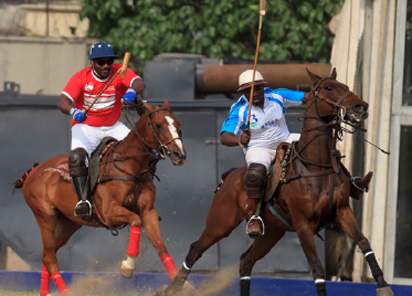 The final week of the 2019 GTBank Lagos International Polo Tournament galloped off yesterday with 10 teams in action for the day in the Low and Majekodunmi Cups.

Following the excitement that greeted the first phase, an elated Managing Director of GTBank, Segun Agbaje, reassured of the sponsor’s commitment to the tournament stressing that their bankrolling of this year’s tournament demonstrates the bank’s strong belief in the role of sports in developing and uniting the society.

With the first phase concluded last weekend which saw Kaduna Trapcco and Lagos NRT emerging champions of the Silver and Open Cup titles, eight teams will start their quest for the Low Cup with Lagos teams, A+/RCF  and Weyland STL slugging it out in the first match of the day.

Kano Nakudu and Iyatu Farms will then try each other for size in the second match before Lintex/ Sublime face off Anadariya in the penultimate Low Cup match which has seven Lagos teams and six visiting teams in contention.

Northern Nigeria rivals AGAD and Kano Ibah will round off hostilities in the Low Cup which will see the best four placed teams advanced to the semifinals.

The day’s activities will be concluded with the mouthwatering Majekodunmi Cup game between Lagos Centraus and Almat Farms from Kano.

Centraus are at +16 handicap with Bode Majankuola and Adeyemo Alakija alongside two Argentine professionals but Almat at +15 are no pushovers with Chris Mackenzie +7, Andre Crespo +5, Maurice Ikpeyong 0 and Idris Badamasi +3 forming a formidable team.