Last Friday (March 8th), the world celebrated the International Women’s Day – a day set aside to draw attention to the common plights of women, as well as an avenue to applaud the strides and achievements of women across various spheres of influence, and women in Sport are not left out. 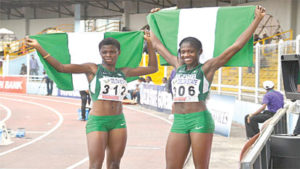 After all, Nigerian women have over the years, left indelible marks in the sporting world in general, and in Athletics in particular. Many of them have proved worthy ambassadors for Nigeria and brought fame, glory and laurels to this nation, and deserve to be celebrated.

If one considers Nigeria’s participation at the Olympics, starting from 1952 when we made our debut appearance at the Games, to the Rio Games in 2016, Athletics accounts for 13 of Nigeria’s 25 medals won at the Olympics. Now, of the 13 medals gained in Track and Field, women were responsible for eight of those medals, while their male counterparts lay claim to the remaining five.

The quartet of Beatrice Utondu, Christy Opara-Thompson, Mary Onyali Omagbemi and Faith Idehen won a Bronze medal in the women’s 4x100m at the 1992 Olympics in Barcelona, a medal that was celebrated as though it were Gold.

Four years later, Chioma Ajunwa made history by becoming Nigeria’s first individual medallist in Athletics at the Olympics after winning the Long Jump with an African Record of 7.12m. She remains the country’s only (male or female) individual Gold medallist at the Olympics, and is the first black African woman to win an Olympic Gold in a Field event.

At the same Games, Olabisi Afolabi, Fatima Yusuf, Charity Opara and Falilat Ogunkoya stormed to a Silver medal in the women’s 4x400m; Ogunkoya then claimed a Bronze in the individual 400m, while Onyali-Omagbemi also raced to a Bronze medal in the 200m. As such, all medallists for Nigeria in Track and Field at Atlanta ’96 were women!

At the Sydney 2000 Games, Glory Alozie overcame the trauma of losing her fiancé to win a Silver medal in the 100m Hurdles. She remains Nigeria’s only Olympic medallist in the hurdles and the last Nigerian to win an individual Olympic medal on the track.

Franca Idoko, Gloria Kemasuode, Halimat Ismaila and Damola Osayomi got to the podium of the women’s 4x100m at the Beijing 2008 Olympics, having won a Bronze medal which was later upgraded to Silver. In the same vein, Blessing Okagbare also leapt to a Silver medal in the women’s Long Jump in Beijing.

Davidson Ezinwa, Uchenna Emedolu and Olusoji Fasuba came close to winning the men’s 100m; Ezinwa won a Silver medal at the 1990 edition of the Games, while Uchenna Emedolu replicated the feat in 2002. Olusoji Fasuba did same in 2006 in Melbourne, which, incidentally, was the last time a Nigerian male sprinter got a podium finish at the Commonwealth Games.

At the 2018 Commonwealth Games in Gold Coast, Australia, women won six of the nine Gold medals secured by Nigeria across all sports. Out of the total 24 medals won, 14 were claimed by women! Five medals were won in Athletics in Gold Coast and three of them were from women: Tobi Amusan (100m Hurdles Gold); Patience Okon-George, Glory Nathaniel, Praise Idamadudu and Yinka Ajayi won a Silver in the 4x400m, while Okagbare, Joy Udo-Gabriel, Tobi Amusan and Rosemary Chukwuma took Bronze in the 4x100m.

Our women have paid their dues, and even though there’s always room for improvement, it must be said that they deserve some accolades!