Aston Villa midfielder Jack Grealish was punched in the face by a pitch invader during their 1-0 victory at derby rivals Birmingham City in the second-tier English Championship on Sunday. 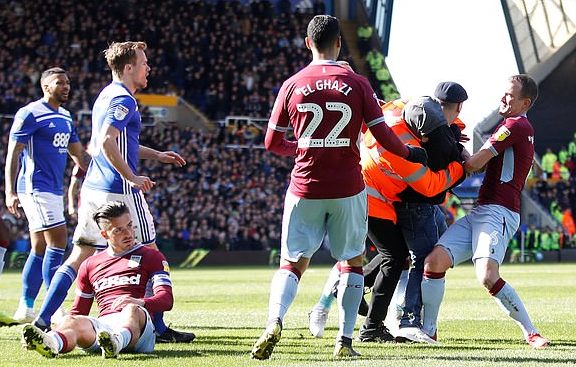 The supporter ran on to the pitch at St Andrew’s Stadium in Birmingham and made a beeline for Grealish, who did not see him coming.

He then landed a punch to the side of his face, with Grealish falling to the turf.

A steward and Aston Villa players Glenn Whelan and Tammy Abraham caught the man and dragged him away from the spot.

The Aston Villa captain got to his feet a few seconds later, apparently unhurt.

The match continued after stewards and security personnel had ushered the man, seen blowing kisses to the crowd, off the pitch.

West Midlands police said later a man had been arrested.

“There’s rivalry and stuff in football, but I don’t think there’s any place for that in football,” Grealish said after the match.

Grealish then had the last laugh, after his second half goal gave Aston Villa all three points.

It allowed them to leapfrog their Midlands rivals and move up to ninth in the standings.

Aston Villa are now a point ahead of Birmingham.

“I just tried to get on with my job really and I think I did.

“It’s the best day of my life. To come here for the first time as Aston Villa captain and score the winner is what dreams are made of,” Grealish added.

Birmingham City apologised to Grealish and Aston Villa and said the supporter would be banned from the stadium.

“We deplore the behaviour of the individual who committed this act and assure that he will be banned from St. Andrew’s for life,” the club said in a statement.

“What happened has no place in football or society.”

The English Football League (EFL) condemned the actions of the supporter, promising to work with the relevant parties to address the issue and take appropriate action.

“It’s a situation no player should ever be faced with,” the EFL said in a statement.

“In all circumstances the playing surface is for players, not supporters…

“Those playing in the game must be able to do so safe in the knowledge they will not be subjected to this type of behaviour.”(Reuters/NAN)