Three Lyon players were burgled while their club was playing Barcelona in the Champions League, continuing a recent pattern for players and officials at big French clubs. 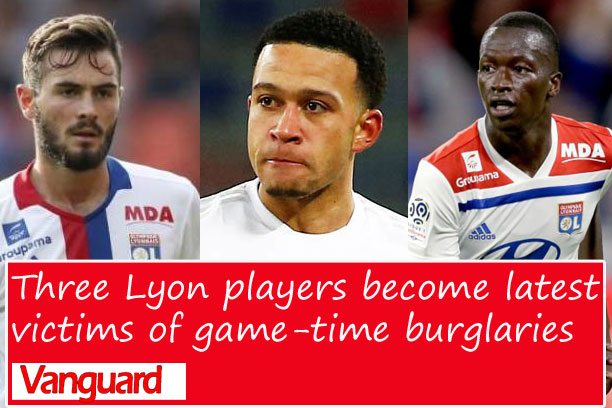 Police said they were called at 0045 on Wednesday morning to the home of attacker Memphis Depay, in the Lyon suburb of Ecully. Thieves had forced a window and took goods, mostly fashion items, of an unspecified value.

Depay had already been burgled last September, while Lyon were playing Nice. On that occasion property worth more than one million euros was taken.

Midfielders Lucas Tousart and Pape Cheikh Diop, who both came off the Lyon bench in the second half of the goalless draw, returned to their homes in the suburbs to the same unpleasant surprise.

Thieves broke down a basement door at Tousart’s home in Chaponost and took a bag and “multimedia”. There were also signs that thieves tried to break into his car, said the local gendarmerie.

Burglars broke in through Cheikh’s terrace in Limonest and stole jewels and branded clothing.

Officials and players in Marseille and Paris have also been the targets during games in recent months.

The home of Marseille president Jacques-Henri Eyraud was robbed during the night of February 8 while he was in Dijon watching the team in Ligue 1.

Forward Eric Maxim Choupo-Moting’s house was broken into twice: once while PSG were playing in November and again in December by burglars who fled when they set off the alarm.

PSG captain Thiago Silva was burgled in December while playing at the Parc des Princes.

In December 2017, the Paris apartment of then-PSG coach Unai Emery was robbed as his team played Strasbourg.