Barcelona will have their eyes on a big three points against visitors R. Valladolid on Saturay night, coming into the game on the back two successive draws in LaLiga Santander. 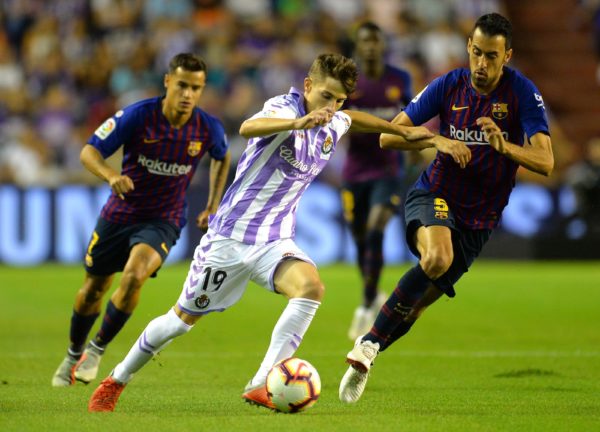 The game at the Camp Nou will also be extra special for Ronaldo Nazario, now president of Valladolid, who won LaLiga’s pichichi topscorer award during his stint at Barcelona in 1996/97.

Real Madrid, meanwhile, are going for a sixth consecutive LaLiga victory at home when they face Girona on Sunday lunchtime with key players including Vinicius Junior and Karim Benzema bang in form. Santi Solari’s side moved second in the table following last weekend’s 3-1 derby victory at Atletico de Madrid, while an out-of-form Girona have fallen to just one point above the drop zone.

Atletico, who dropped into third, make the short trip across the Spanish capital to Rayo Vallecano on Saturday afternoon for a second city derby, with both teams looking to get back on track after defeats in their last two league outings.

The weekend’s action kicks off Friday evening with the meeting of two of LaLiga’s most in-form sides. Eibar are unbeaten in their last eight home games at Ipurua including 3-0 victories in their last two, while Getafe have won three of their last five LaLiga games to climb to fifth in the table.

Saturday’s early game is a relegation six-pointer at Balaidos where 17th placed RC Celta will hope to build on three points in their last home game as they welcome a Levante side who need a result after losing four on the bounce away from home.

Saturday afternoon has Real Sociedad hosting Leganes with the hosts allowing the visitors to wear their usual blue and white colours at Anoeta, a friendly gesture to repay Leganes having helped them out by doing similar last term.

Valencia host Espanyol on Sunday afternoon with both teams having improved results in recent weeks. Los Che are now unbeaten in five in LaLiga Santander and climbing steadily towards the top four.

Later on Sunday fourth-placed Sevilla, aiming to strengthen their grip on the final Champions League qualification spot, visit a Villarreal side whose performances have improved lately but are still looking for their first victory of 2019.

The battle for European competition next year will also be uppermost in minds at the Benito Villamarin on Sunday evening, where seventh-placed Real Betis host an Alaves side just three points and one place above the Andalusians in the table.

Monday’s game sees bottom team Huesca look to continue their impressive upswing with a third straight LaLiga victory when they welcome Athletic Club to El Alcoraz. Athletic will be confident after recent good results themselves, including last weekend’s 0-0 at home to Barça.

• LaLiga legend Ronaldo Nazario’s Valladolid travel to his former side and league leaders Barcelona who should have Lionel Messi back to full fitness.
• Real Madrid are gunning for a sixth consecutive LaLiga win against downwards-trending Girona.
• Atletico de Madrid dropped into third last weekend and are looking to get back on track against city rivals Rayo Vallecano.
• Two of LaLiga’s most in-form sides meet at Ipurua: Eibar are unbeaten at home in eight while high-flying Getafe are within striking distance of the top four.
• Goals aren’t the problem for either of these sides, but they both find themselves at the wrong end of the table. It’s a six-pointer between Celta and Levante at Balaidos.
• Real Sociedad and Leganes face off at Anoeta separated by just two points in the table.
• Valencia are steadily climbing the table… will they continue their resurgent form against Espanyol at Mestalla?
• It’s top vs bottom at the Sanchez-Pizjuan. Champions League chasers Sevilla host a Villarreal side still looking for a first win of 2019.
• Another European duel: expect a capacity crowd at the Benito Villamarin when seventh-placed Real Betis host Alaves in sixth.
• Huesca remain bottom but are looking for a third straight win in LaLiga. Will they get it against Athletic on Monday night?

2019-02-15
Previous Post: Ighalo happy to reunite with Watford coach at Shanghai Shenhua
Next Post: Neuer back from injury ahead of Liverpool clash