CNN’s Marketplace Africa speaks to the NBA’s first African-born vice president, Masai Ujiri who is the President of Toronto Raptors. Ujiri speaks about his approach to the business and the future of basketball in Africa. 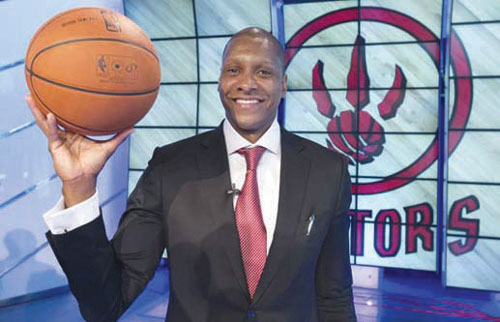 Ujiri, who is originally from Nigeria, tells presenter Eleni Giokos about how his passion for basketball first started: “We were on our way to the soccer field and saw this guy shooting [basketballs] and the way he shot the ball and it was going right in and those basketball courts it was not a net, it was a chain.

So, there were chains and it was just going Chas Chas and it was unbelievable the sound and all we wanted to do was shoot the ball and hear that Chas Chas.”

In Nigeria, Ujiri only picked up a basketball at 13 but would go on to play professionally until discovering the joys of coaching. He explains: “I was playing in lower leagues in Europe and making a couple of thousands of dollars a month, where is this taking me? I don’t want this. Luckily for me, I fell into the coaching and the junior National team… the low gig of scouting and luckily, I got a break in the NBA.”

In 2003, the Nigerian native started the Giants of Africa, a non-profit that helps young children learn more about basketball and leadership. Ujiri explains to Eleni Giokos why he believes the initiative is necessary: “We lack the facilities in Africa.

And so, it doesn’t give the kids a chance. I say that there is talent in Africa walking everywhere, it’s a gold mine… They need to see people like us, so they believe in themselves… At the end of the day, in my heart, you’re a scout. And one day you want to say, I found this Mutombo, or Pascal Siakam. You want that great player, you want to find somebody that’s just going to come and kill it.”

Originally formed in Nigeria, Giants of Africa now runs camps all over Africa. Masai Ujiri tells the programme why he is dedicated to the charity: “I feel that if I don’t help more youth, and more Africans to grow, more people to follow me. We need more General Managers. I need more youth, I need more people to see that it can be done. Whether it’s coaching. Whether it’s scouting. Whether it’s playing, whatever it is, people can see that yes it can be done by an African. It’s something that I really take pride in.”