Liverpool wasted a chance to cement their stranglehold on the title race on Wednesday after Manchester City’s shock slip.

Chelsea suffered their worst defeat for 23 years, while Mesut Ozil came in from the cold at Arsenal. 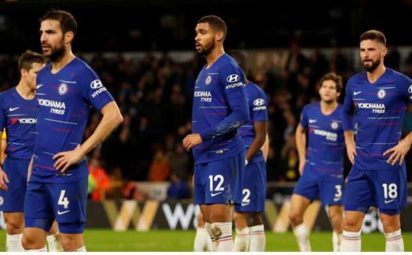 Here are five things we learned from the Premier League’s action-packed midweek programme:

With the destiny of the title race in Liverpool’s hands after Manchester City’s shock loss at Newcastle 24 hours earlier, there was a mounting feeling of celebration around Anfield when Sadio Mane opened the scoring in the third minute against Leicester.

A Liverpool win would have moved them seven points clear of second-placed Manchester City and put the Reds well on course for their first English title since 1990.

But, as Jurgen Klopp’s side lost their way in the first half, that warm sense of imminent success melted away like the snow that dusted the Anfield pitch.

Poor marking from Virgil van Dijk allowed Harry Maguire to equalise for Leicester and it could have been even worse in a patchy second half.

Klopp felt Liverpool should have had a penalty, but in the end they had to settle for moving five points ahead of City, who now have renewed hope of catching the leaders.

‘Fergie time’ not enough for United

Ole Gunnar Solskjaer’s winning run since taking over as caretaker manager of Manchester United has brought memories flooding back of Alex Ferguson’s golden years in charge at Old Trafford when the Norwegian was a player.

To add to the daring, attacking brand of football, United’s current crop have now also shown the ability to fight back at the death that characterised Ferguson’s title-winning sides, most notably when Solskjaer scored the second of two goals in stoppage time to beat Bayern Munich 2-1 in the 1999 Champions League final.

Yet, even two goals in the final minutes were not enough for a ninth straight victory under Solskjaer in a 2-2 draw with Burnley on Tuesday, although Chelsea’s 4-0 thrashing at Bournemouth means United are now just two points off a top-four place.

Pep Guardiola vehemently insisted the champions had not underestimated Newcastle in a shock 2-1 defeat, but just as they did in similarly surprising December losses to Crystal Palace and Leicester, City took their foot off the gas after going 1-0 up early on.

Ahead inside 24 seconds at St James’ Park, Guardiola did concede his side played with nowhere near enough aggression or urgency to kill the game off before Newcastle staged a second-half fightback.

Just as worrying for the Catalan coach will be the lack of a response to falling behind in each of those three defeats and in losing 2-0 to Chelsea.

Not once have City come from behind to win a game in the Premier League this season and have picked up just one point from a losing position in a 1-1 draw at Wolves in August.

Tottenham were staring down the barrel with 10 minutes left of their match against Watford, trailing 1-0 after a miserable week in which they crashed out of two cup competitions.

They dominated possession at Wembley but badly missed the cutting edge of the injured Harry Kane and Dele Alli’s creative input.

But Son Heung-min, back from Asian Cup duty, looked sharp throughout and got his reward in the 80th minute, driving home the equaliser before Fernando Llorente struck the winner in a 2-1 victory.

Spurs boss Mauricio Pochettino badly needs Son to keep firing as Tottenham strive to keep Arsenal and Manchester United at bay in the race for Champions League qualification, while also keeping the pressure on Man City and Liverpool at the top.

Ozil comes in from the cold

On a freezing night in north London, Mesut Ozil’s winter exile came to an end as the Arsenal midfielder was recalled by Unai Emery for their 2-1 win over Cardiff.

Ozil has been put into cold storage by Gunners boss Emery for much of the season after he grew frustrated by the German’s failure to respond to his demands for a high-tempo style of play.

Although Ozil is Arsenal’s highest-paid player, there has been talk he might be sold amid reports of a training ground bust-up.

Against that backdrop, it was intriguing to see Ozil start a game for the first time since December 26, with Emery handing him the captain’s armband.

Ozil lasted for 76 minutes, and even earned rare praise from Emery. “He worked like we wanted. It was good,” he said.