Colombian forward Duvan Zapata continued his goal-scoring streak to snatch a point for Atalanta as Roma blew a three-goal advantage to draw 3-3 on Sunday. 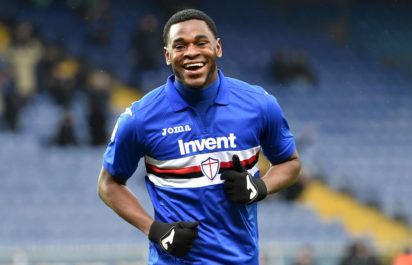 Zapata missed a penalty but less than a minute later made up for his blunder with the third goal in Bergamo.

It ended Roma’s three-match league winning run as Eusebio Di Francesco’s side missed the chance to take fourth spot from AC Milan, who were held to a goalless draw by second-placed Napoli at the San Siro on Saturday.

Roma had been three goals up following an Edin Dzeko brace, with Stephan El Shaarawy adding a third five minutes prior to the break, before the Romans faded under the driving rain in northern Italy.

“The problem is this isn’t the first time it has happened to us,” said Di Francesco.

“What drives me crazy is the lack of consistency from this team, even during the same match.

“It’s absurd to see a team with the same players put in such a different performance from one half to the next.

“We were fortunate to get a draw.”

Dzeko broke through after just three minutes for his first goal in Serie A since October, adding a second half an hour later, with budding teenage star Nicolo Zaniolo providing two assists.

Atalanta fought back with Zapata heading just wide before Roma doubled their lead against the run of play with Steven Nzonzi finding a way through for Dzeko to finish off.

Zaniolo set up El Shaarawy to make it 3-0 five minutes before the break but Timothy Castagne headed Atalanta back into the game before the interval.

Di Francesco’s men struggled after the break with former Roma defender Rafael Toloi nodding in Atalanta’s second just before the hour off a Papu Gomez cross.

Zapata missed a chance for a third ten minutes later sending a penalty kick over the bar.

But a minute later he fired in his 14th goal in the last eight league games, for a total of 15 this season.

Both sides also drew 3-3 when they met in Rome last August, a game in which the Romans had come from 3-1 down.

Roma remain just outside the Champions League places in fifth, one point behind AC Milan, with Atalanta in eighth, three points off the elite European places.

Earlier 10-man Fiorentina grabbed a 4-3 win away to bottom club Chievo, as Parma fell 3-2 at home to SPAL while Camillo Ciano scored a brace for struggling Frosinone in a 4-0 win at Bologna.