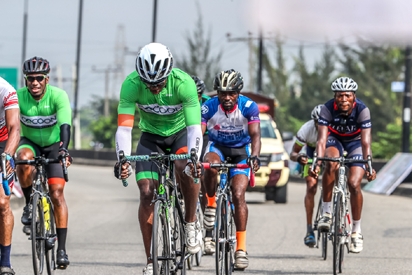 Eight years ago I ran into Rev (Dr.) Moses Iloh, now late and he lamented the decline in Nigeria’s sports, especially cycling. He was once president of the Cycling Fedration of Nigeria, CFN and decried the state of the sport and other lesser sports which have been abandoned by government that concentrates only on football.

Rev Iloh’s anger was borne out of the fact that after his cry and pressure on the government to ensure that a cycling Velodrome was built for the country, it was eventually built for the 2003 All Africa Games but rather than make use of the facility, the authorities started using it for other non sports events like weeding receptions, meetings, Church programmes and other sundry activities.

The situation further deteriorated when the powerful wife of a top government official converted the velodrome, which ranks among the third best in the world and the best in Africa, into a warehouse for cooking gas cylinders she had  bought to share to Nigerian women who she expected to return the then ruling party to power in the 2015 elections.

No one one knew why the cylinders were not eventually shared. The strong woman’s husband’s party was defeated at the polls and the cylinders were thus abandoned at the Velodrome. And it remained like that until later part of last year when the current leadership of the Sports Ministry decided to evacuate the cylinders to God knows where. One great decision by Barrister Solomon Dalung.

That was after the Sports Ministry had revoked the right of Cross River State to host the National Sports Festival for delaying it for six years. During the last festival, the Velodrome was still not in proper shape for track cycling but was used for other events like wrestling, judo, Karate, Kick-boxing and taekwondo. Part of Iloh’s frustrations then he put like this: “We have been developing cycling but the people who are there are not interested, because the (govt) has not been supportive to us when we were there. How can we have such a fantastic edifice and it is lying fallow.”

I have a cycling club, we represented Lagos state at the last four festivals, at no cost because the governor (Babatunde Raji Fashola) is a good man and it is expensive running the club, hoping that I can get people who can take over the club. I can not continue, I’m a pastor not a business man but I am just doing it because I want to maintain the impetus of the sports. Not every youth is supposed to play football but everything now is football. Football has money yes, but boxing, cycling and other sports also can fetch money. And you see, I have a philosophy that money means time, and talent, time is free, so if you put it together, no youth will be poor especially having over 40 million youths unemployed and poor youths in the country doing nothing. I just pray to God that somebody that understands, that can listen and come down from the high horse and be the president of Nigeria one day, not arrogant fellows, so we can meet him and talk sports.”

Whether Nigeia now has a listening president I cannot say but the fact is somebody who understands what Rev Iloh was crying over many years ago now heads the CFN. He is Chief Giandomenico Massari, Italian-born but now a naturalised Nigerian and his passion for cycling is indescribable. He has used his personal resources and with the support of a few corporate bodies he has been able to convince, to support potential champion cyclists. He makes sure they attend competitions to face other great cyclists around the world. He assured cycling faithful last year that he will ensure the Velodrome host some African championships as he has been talking to those who matter in the admonistration of the sport in Africa. And only last week, two Nigerian cylists, elite female rider Tombrapa Gladys Grikpa  and junior cyclists, Mary Samuel won seven medals at the African Women Track Championship concluded in South Africa. This further demonstrated the potential the country has in track cycling.

While Samuel won four silver medals in sprint and point race in the Junior Category, Grikpa picked a silver and two bronze medals in the elite events. Worthy of note is the track championship is one of the qualifying events for next year’s Tokyo 2020 Olympic Games .

The Nigerian girls pulled this feat despite appearing at that stage for the  first time in the continent. And a member of the CFN and former national champion, Dr Emmanuel Igbinosa as well as the Technical Director of the CFN, Bashir Mohammed said if the girls could put up such a performance after training for less than two weeks, it shows the country has hope in track cycling. Dr Igbinosa advised cyclists to endeavour go to Abuja to train at the Velodrome which will be open to them henceforth.

A proud Chief Massari said the girls’  performance at the African Championship came with just a little technical support from South African Olympian, Jean-Pierre van Zyl who took charge of the  preparation of the riders who do not have access to tracks in their home countries.

“We have great potential in track cycling but owing to the problems we have had with the use of the Velodrome, these talents are not harnessed for this coming Olympics ” he regretted, maintaining however, that Nigeria has great potential in track cycling from the sheer power of the average Nigerian athlete.  He also pointed out that with adequate preparation, the cyclists may surprise the world  at the 2019 UCI world track championship scheduled for Pruszkow, Poland at the end of February. Rev Iloh would be happy wherever he is now that at least, someone has appeared on the horizon to live his dreams.