Turkish Super Lig side Fenerbahce have confirmed via their official website the signing of former Nigeria international Victor Moses on loan until the end of the 2019-2020 season. 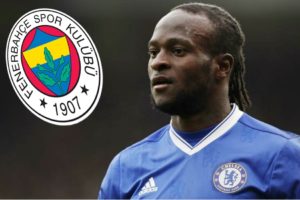 Moses to get £130K offer from Fernebahce

The right winger penned a contract with The Yellow Canaries after passing a medical following his arrival in Istanbul.

Moses is departing Chelsea on a temporary basis after scoring 18 goals in 128 appearances since joining the club from Wigan Athletic in August 2012.

With previous loan stints at Liverpool, Stoke City and West Ham, this is the fourth time he has been farmed out on loan by The Blues in order to experience first-team football on a regular basis.

Moses has appeared in only six matches for Chelsea this term, with five appearances off the bench.

The 28-year-old started his career in England with Crystal Palace, where he spent nine years.