ASABA – THE Super Eagles of Nigeria, was Sunday held to a goalless draw by the Cranes of Uganda in an international friendly match.

The highly entertaining game played at the Stephen Keshi Stadium Asaba, Delta State had Governor Ifeanyi Okowa and top government functionaries in the state in attendance. 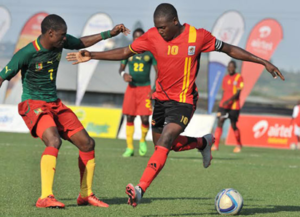 Both countries last Saturday, qualified for the African Cup of Nations billed to hold hold in Cameroon next year.

The Super Eagles dominated the game in which they missed many scoring chances.

Super Eagles Coach Rohr was forced to make several substitutions in the second half after many unsuccessful attempts to break down the compact defence of the Uganda national team.

Troost Ekong was brought in for Oghenekoro Etabo while Samuel Kalu came in for Simon Chukwueze as Isaac Success replaced Victor Osimhen.

Earlier before the kick off, there was a novelty match which saw former Super Eagles defeating Delta All Stars by two goals scored by Mutiu Adepoju.

President of the Nigeria Football Federation, Pinnick Amaju featured in the match and dazzled for the former Super Eagles

2018-11-20
Previous Post: There will be no Super League, UEFA chief says
Next Post: Infantino tells Qatar it has to host best World Cup ever