Players of Nigeria Professional Football League side, Rivers United were left stranded at their hotel camp in Abakaliki Friday at the conclusion of the 2018 South East/South South preseason tournament. 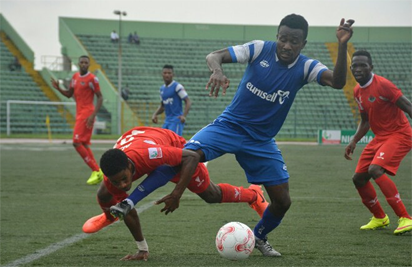 Checks reveal that officials had checked out of their hotel very early in the morning and headed home.

But the players were left to their fates as the bus could not contain the number of players who came for the tournament as well as new arrivals who came to negotiate for new contracts.

It was suggested that an alternative arrangement be made to provide another bus or give the extra players money to take them to Port Harcourt or Owerri where they were scheduled to face Heartland Saturday morning in a friendly match.

No official was spotted at the hotel as at 1.45pm with the players stranded in front of the hotel having checked out earlier in the morning.

But when contacted on phone, a management official said they left so as to book hotel reservation for the team in Owerri ahead their friendly match with Heartland.

Reminded that arrangement should have been made to transport the players first, he retorted, “that is not my responsibility”.