Paul Pogba and Anthony Martial scored as Manchester United recorded a much-needed, if unconvincing, 2-1 Premier League win over Everton to ease the scrutiny on manager Jose Mourinho on Sunday. 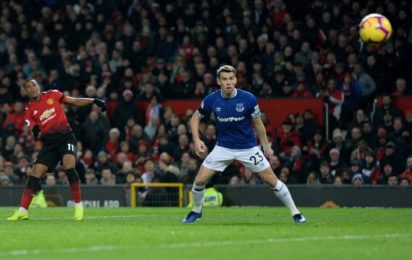 Gylfi Sigurdsson’s late penalty ensured an anxious end to proceedings for the hosts but, with United’s legendary former star Eric Cantona watching from the stands, his fellow countrymen did enough to secure three points.

The result also vindicated Mourinho’s decision to drop struggling centre-forward Romelu Lukaku from his starting line-up after the Belgian international had failed to score in his previous eight games.

Pogba shot United into the lead after 27 minutes, although he needed a large slice of luck to convert after his penalty was superbly saved by Jordan Pickford.

The decision to award the spot-kick was hotly disputed by the visitors although Idrissa Gueye did appear to impede Martial as he darted into the area even if the Frenchman made the most of the contact.

When Pogba strode up to take the penalty, he performed his by-now familiar routine of making a series of stuttering steps — no fewer than 26 in total — before seeing his shot stopped magnificently by the Everton keeper.

To spare Pogba’s embarrassment, the rebound broke kindly for the midfielder who tapped it calmly into the open net, but he still received jeers from some sections of the United support.

It was just the start the hosts needed after the disappointment of the midweek home Champions League defeat by Juventus and a run that had seen them win just one of their previous seven games.

Three minutes into the second half, Pogba was involved again for United’s second, brilliantly finished by Martial with a curling right-footed shot from outside the box, reminiscent of his second goal in the 2-2 draw at Chelsea last weekend.

Everton had enjoyed their best spell after going behind to the first United goal with Sigurdsson heading straight at David de Gea from a promising position and Theo Walcott placing two chances too close to the United ‘keeper.

Sigurdsson and Richarlison then linked well to send Bernard clean through on goal and, after managing to round De Gea, the Brazilian appeared poised to convert into the open net only to hit the side-netting from a tight angle.

Everton were finally rewarded for their endeavour after 76 minutes when Pogba lost the ball to Sigurdsson and the Icelandic international sent away Richarlison who was clumsily felled by Chris Smalling for the second penalty of the game.

Sigurdsson took a more orthodox approach to his effort than Pogba, blasting an unstoppable shot past De Gea into the corner.

United negotiated a nervy finale, but they could have had another goal when Martial was played clean through on goal only to be denied by Pickford.