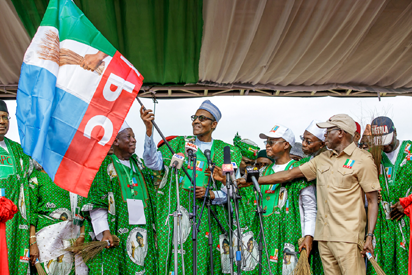 Hon. Joshua Ojo, Speaker, Oyo State House of Assembly, on Friday denied that he had defected from the All Progressives Congress (APC) to another party.

Ojo, who made the denial while briefing journalists in Ibadan, said he remained loyal to APC at the both state and national levels.

“I can categorically tell you that no party in the Oyo State House of Assembly outnumbers APC.

“Even though we have other political parties such as ADC, ADP, and PDP, I can assure you that none of them has supersedes the APC in the House.

“It is a rumour. I am still in APC and I will remain in APC and I cannot defect from APC to any other political party.

“Although former governor Alao Akala remains my Oga, for now, our political affiliation is very different.

“Notwithstanding, I can tell you that I am still in APC and I will remain there.’’

The speaker called on the generality of the people of the state to cooperate with the present administration to consolidate on the gains so far recorded in the governance of the state.

2018-10-26
Previous Post: REVEALED: I was tortured severely by SARS — Evans
Next Post: Nigerians to Buhari: Show us your WAEC, other academic credentials