Enugu Rangers staged a thrilling comeback from three goals down to beat Kano Pillars on penalties and win their first Nigerian Cup since 1983 on Wednesday.

Rangers will represent Nigeria in next year’s CAF Confederation Cup after claiming their sixth Nigerian Cup title in total, pocketing a cash prize of 25 million Naira ($69,000). 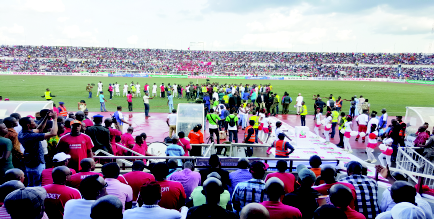 Pillars looked to be cruising to their first-ever Cup triumph when they led 3-0 with just 13 minutes to play at the Stephen Keshi Stadium in Asaba.

But Kevin Itoya’s screamer from the edge of the box beat goalkeeper David Obiozo to give Rangers a glimmer of hope.

The Flying Antelopes made the game even more interesting in the 82nd minute as Chidera Ezeh made it 3-2, and substitute Ajani Ibrahim’s brave diving header restored parity in injury-time.

Kano Pillars had taken the lead after less than five minutes through skipper Rabiu Ali, before Nigeria Under-20 midfielder Alhassan Ibrahim scored directly from a corner and Nwagua Nyima netted shortly after half-time.