By Olasunkanmi Akoni
Ahead of 2019 Presidential elections, spokesman of the All Progressives Congress, APC Lagos chapter, Joe Igbokwe, has said none of the candidates is capable of defeating the incumbent President Muhammadu Buhari, boasting that his achievements will stand him out among other contestants.
He stressed that since assumption of office, Buhari has continued to improve the standard of infrastructure, tackled corruption for the  general interest of every citizen.
Igbokwe gave the assurance while debunking allegations credited to him that APC will not hand over power to Peoples Democratic Party, PDP, in 2019 if outcome of the election favoured the opponent. 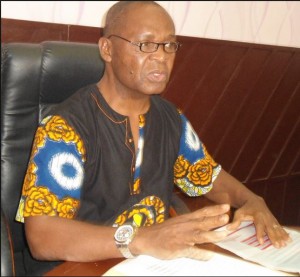 According to him: “President Buhari as a Democrat, an incorruptible person and an honest man will hand over power to any candidate that wins, but am sure that all these candidates put together can defeat this great man (Buhari), known for honesty and integrity in 2019, all things considered.
https://www.vanguardngr.com/2018/10/buhari-congratulates-emir-of-zuru-sani-sami-at-75/
“I have no power whatsoever to stop Independent National Electoral Commission, INEC, from handing over power to any of the candidates out of more than 20 contestants that wins the 2019 Presidential Elections.
“The truth Peoples Democratic Party, PDP, and their colonies of unrepentant looters must know is that there are some Nigerians we have sworn never to trust with the keys of the Treasury of Nigeria given the monumental damage they inflicted on the project Nigeria in 16 years. This is the self evident truth they do not want to hear.
“We will not be distracted by the antics and shadow chasing PDP is known for. They sit down to gossip and make all the noise but we do work silently. History will remain our witness in fullness of time,” Igbokwe stated.