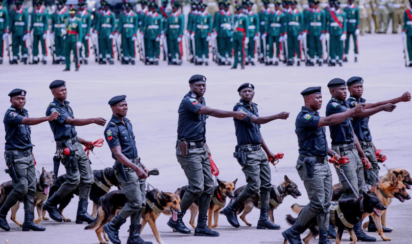 Acting DCP Jimoh Moshood, the Force Public Relations Officer, disclosed this while addressing newsmen on the arrest on Sunday in Abuja.

Moshood listed exhibits recovered from them: Three AK47 Rifles,38 Rounds of AK47 Ammunition, one Honda Hennessey Car belonging to the victim and one Cutlass used for killing their victims.

The spokesman said that Yinusa, the leader, had led so many kidnapping gangs; for several kidnappings of prominent Nigerians, including one Aisha Haruna, abusiness woman.

“The suspect, Hawa Yinusa further went to court and sworn to an affidavit claiming that the victim was her sister before she died and was in the process of withdrawing from the Bank N1million belonging to the victim before she was arrested,” he said.

He said that Dahiru and Hamisu were mobilised into the criminal gang by Yinusa, adding that one of the suspects died during a shootout with the police.

Moshood said the suspects have carried out several kidnappings between Abuja, Nasarawa and Plateau States.

“They have also been involved and confessed to other forms of kidnappings of innocent people, collecting their ATM Cards and withdrawing their money before releasing them.

“Some of their victims have come forward to the Police investigator and identified them. They will be charged to court on completion of Investigation.

In a related development, Moshood said Dr. Kasim Abdulganiyu has been arrested for giving false information and misleading the Police.

He said that the suspect gave a false information that led to the search of the house of Amb. Ibrahim Zakari, former Director-General, National Intelligence Agency (NIA) in Kaduna, Kaduna State.

He said that the suspect informed and made voluntary statement to the Police on 20th August, 2018 that firearms and ammunition were stocked in the house of Zakari before the police obtained and executed a valid search warrant in the house on Aug. 28.

“The Police Team also had no knowledge that the house belong to Zakari before the search warrant was executed,” he said.

He said that Abdulganiyu of No. 21 Colorado Crescent, Ministers Hills, Abuja, would be arraigned in court for giving false information and telling falsehood to mislead police action without further delay.( NAN)