Nigerian court is a Kangaroo court. I did not jump bail, says Nnamdi Kanu 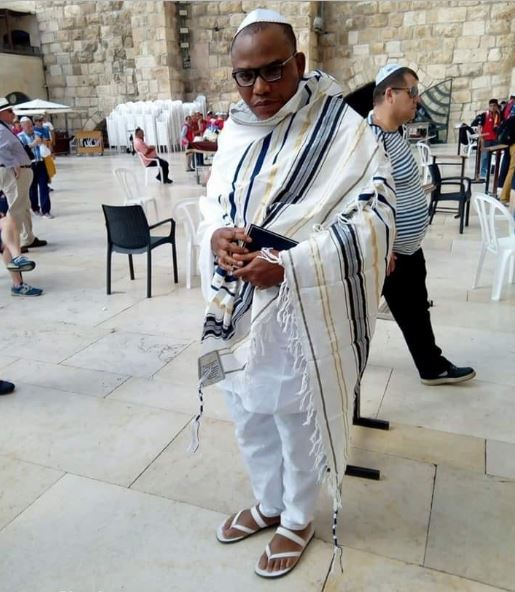 Nnamdi Kanu, leader of the Indigenous People of Biafra (IPOB), has vowed not to return to the federal high court in Abuja where he was standing trial before he left the country.

The federal government had charged him with treason but Binta Nyako, a judge of the federal high court in Abuja, had granted him bail after 18 months in detention.

Kanu had flouted all the terms of the bail before the military invaded his Abia residence on September 14, 2017.
He fled afterwards and resurfaced in Jerusalem on Friday.

In a broadcast via Radio Biafra, Kanu boasted that the Nigerian court lacks the capacity to try him.

He said the judge who has asked his sureties to produce him should have asked the army why they invaded his residence.

“Nigerian court is a Kangaroo court. I did not jump bail, I left because the court failed to protect me,” he said.

“I shall not be honouring the court. I cannot be tried by a court I do not recognise.”
Meantime, Elliot Ugochukwu Ukoh, founder of ILT said Mazi Nnamdi Kanu called him yesterday morning and  briefed  him on goings on, including his travails of the past 13 months.He told me he called a few other persons as well.

According to him, “he thanked all and assured of his total commitment to the struggle for the freedom of his people.He said he has recovered fully and is now in good health. He promised that,  as already known by all and sundry, that he and his group remain completely apolitical. He maintains that they have no interest whatsoever in partisan politics and pleads with politicians trading with his name and that of his organisation, to back off.

“He pointedly told me that they have no business whatsoever with both the APC  and the PDP.He insists he remains relentlessly apolitical and warns those hoping to hustle with his name to back down now.”

2018-10-21
Previous Post: .I would rather die than join APC or bow to Buhari – Fani-Kayode
Next Post: Police nab 3 suspected kidnappers, armed robbers