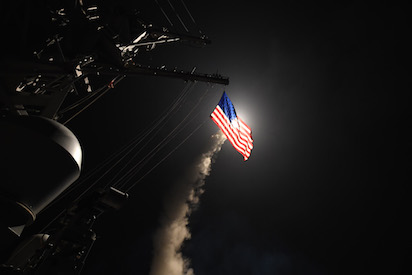 Twenty-eight IS members were killed in air strikes by the US-led coalition around the town of Hajin, the Syrian Observatory for Human Rights said.

Another seven jihadists were killed in ground fighting with the Syrian Democratic Forces, who launched a coalition-backed offensive against the IS-held pocket in the Euphrates Valley last month.

Fighting has killed 414 jihadists and 227 SDF fighters in total since the assault began on September 10, the Observatory said.

Coalition air strikes on IS targets in another part of the pocket on Thursday and Friday killed at least 41 civilians, 10 of them children, the monitor said.

IS overran large swathes of Syria and neighbouring Iraq in 2014, proclaiming a “caliphate” across the land it controlled.

But the jihadist group has since lost most of its territory to various offensives in both countries.

In Syria, its presence has been reduced to parts of the vast Badia desert and the Hajin pocket in the eastern province of Deir Ezzor near the Iraqi border.

Syria’s war has killed more than 360,000 people since it erupted in 2011 with the brutal repression of anti-government protests.

2018-10-20
Previous Post: I believe in Real Madrid more than ever – Lopetegui
Next Post: Vettel acknowledges ‘mutual respect’ in Hamilton rivalry