Why some women prefer fairly-used underwear

The business of fairly-used female underwear now enjoy high patronage among the womenfolk in Umuahia, Abia. 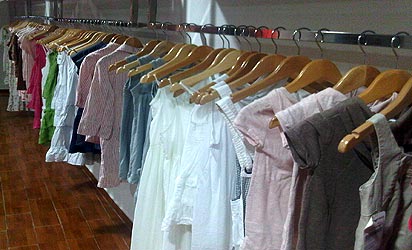 The dealers of the materials locally called “okrika’’, are also recording high traffic of customers daily from neighbouring communities to the state capital.

Some of the women, mainly middle-aged, who shoved themselves around to enable them pick their choice of the underwear at Isi Gate Market, Umuahia, told NAN that they preferred the “okrika’’, especially pants, to new ones.

One of them, who made selections of different colours and designs, said she and most women now preferred the fairly-used underwear often imported from abroad.

Asked if she was not ashamed being seen buying the materials, the lady who pleaded anonymity, queried why she should be ashamed of her choice of underwear.

“Ashamed of what? Ashamed of something good? Ask this seller, l am her very good customer.

“As a matter of fact, she always alerts me whenever she has new consignment. The fairly-used underwear is durable.

“I usually buy the sexy ones and I feel very comfortable whenever I wear it. My husband usually tells me they are good on me, too,” she said.

A male passer-by, who spoke to NAN on the issue, on condition of anonymity, attributed the high patronage of the second-hand pants and other briefs to the nation’s bad economy.

“It is not only underwear that our women scramble for, they buy all sorts of fairly used wears. Anytime I pass this place I see them gather round the sellers, picking all manner of used clothes.

“I think this goes a long way to tell how bad our economy is. Nigeria is a dumping ground for all kinds of used products from America, Europe, Asia and other continents”.

But, a lady, who gave her name as Mary, said she did not like the idea of using fairly-used underwear.

“In fact, I don’t like it for health reasons. One is capable of contracting an infection through this. This is underwear, not outer wears.

“I don’t even know the health status of the person that wore it before now. The body of a woman is very exposed.

“So, why should I buy disease for myself just because I want cheap or so-called quality underwear; I prefer new ones for health reasons,” she said.

In her reaction, one of the sellers of the second-hand pants, dismissed the health hazard fear, saying that the new ones had more health risk “because of the chemicals applied on them’’.

She said: “Okrika (fairly-used) pants are durable and their prices are affordable, too. They don’t have any health risk provided they are soaked and washed in hot water.

“By the way, it is not all that are fairly-used. Those ones that have labels on them are not fairly-used, they are clearance sales (clothes that are out of season).’’

She said that she made a living from the sales as she enjoyed high patronage from women.

“This is the only business that I do. I know how much profit I make daily,” she stated.

However, Dr Ifeyinwa Uma-Kalu, Principal Medical Officer I at the Abia Government House Clinic, said that fairly-used underwear could have dangerous health implications, if not properly treated.

According to her, if the underwear has been used by people that are ill, people that have one skin infection or the other and the buyer doesn’t treat it well, it could be a medium to contact infection.

“It is advisable to treat the underwear properly, either with hot water or disinfectants, before use,” she said.

2018-10-19
Previous Post: Volleyball: Nigeria to participate in World U-19 Boys Championship
Next Post: Police warn motorists against illegal use of tinted glasses