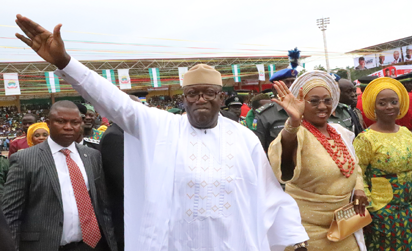 Governor Fayemi was sworn in as Executive Governor of Ekiti State on Tuesday although this is his second coming as a governor.

He arrived the Council Chamber venue of the meeting around 10.54a.m

Fayemi was the centre of attractions as he stepped into the hall being the first time he was attending the NEC meeting under the current dispensation.

He went round the hall to have hand shake with his colleagues.

Cameramen and photographers had a field day taking his shots at he moved from one point to the other.

The meeting started around 11.05a.m when the Vice President called for rendition of the National anthem.

The opening Muslims prayer was offered by the Niger State Governor, Sani Bello.