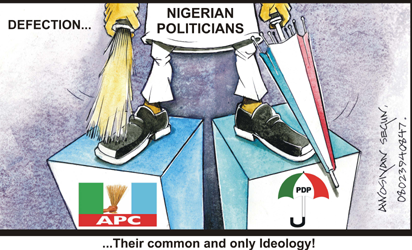 He announced his defection when he led a delegation of his supporters on a solidarity visit to APC governorship candidate, in the state, Mr. Nsima Ekere, at the latter’s country home in Ikot Oboroenyin, Edemaya, Ikot Abasi Local Government Area.

Speaking at the event Ndem said: “With the votes of Mkpat Enin, you will be strolling into Hilltop Mansion. We believe in you because you are one of our own. We have no reason not to support you. We are here because we see the future of Akwa Ibom State.  We are not prepared to support you from behind. We are not ready to play submarine politics. We are ready to support you openly.”

Among the defectors on the delegation were the party chairman in Mkpat Enin Local Government Area, Mr. Ukonsek Ukonsek, Comrade Ubong Kingsley, Mr. Ime Inoh, and some other members of the LGA executive.