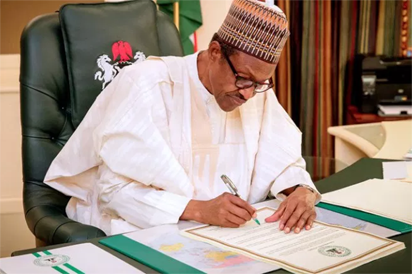 With about $15 billion yearly investments withheld or diverted by investors to other countries due to the uncertainty in Nigeria’s oil and gas industry over the delay in signing the Petroleum Industry Governance Bill (PIGB), into law, stakeholders have called for immediate assent to the bill by President Muhammadu Buhari.

A cross section of journalists from the print, broadcast and online media organisations, who rose from a roundtable in Enugu to examine the subject, harped on the need for the president to sign the PIGB without further delay.

In the communiqué issued at the end of the media stakeholders roundtable, the journalists stated: “The decline of assent to the PIGB was a missed opportunity to advance a token of the commitment of the Nigerian government to modernising the architecture of Nigerian petroleum laws in order to rid it of opaqueness and inefficiency and introduce it to the regime of international best practices, transparency and accountability.

“The decline of assent to the PIGB signals to prospective investors and industry players absence of the political will on the part of the Nigerian government to change the fundamentals of the landscape of the Nigerian Oil and Gas sector. This will inevitably escalate the trend of loss in withheld and diverted capital investments which is plaguing the sector.

“The huge potential of the bill to create wealth, generate jobs and increase Nigeria’s competitiveness in the global energy market ought to take precedence over all political considerations and the security and comfort of the vested interests. The descent of Venezuela to a dystopian basket case is a cautionary warning that the failure to reform will ultimately culminate in devastating consequences.

“The Nigerian petroleum industry is the national cash cow and the most critical sector of the economy. The industry’s capacity to fulfill its traditional role in the Nigerian economy is increasingly being undermined by obsolete petroleum legislation. The recurrent deferment of necessary policy reforms in the Nigerian Petroleum Industry is setting Nigeria up for an existential economic crisis on the scale of the Venezuela nightmare.”

It stated: “Nigerian journalists have a responsibility to deploy their skills and platforms towards pressurising all key actors to take the urgent actions needed to reposition the Petroleum Industry in order to benefit all stakeholders and guarantee sustainable business environment.

“Nigerian journalists can be the game changers in this seemingly intractable reform process. They are well positioned to make exert influence on the general public and the critical mass of key actors.

“It is possible to mount an inclusive advocacy campaign that will rally all Nigerians around the win-win positives of the Petroleum Industry Bills. Going forward, we will accord the bills the priority attention they deserve in our reportage.”

Before then, stakeholders who gathered at Emerald Energy Institute, University of Port Harcourt, Rivers State, to brainstorm on Nigeria’s Petroleum Industry Reforms had stressed the need to hasten work on all the bills.

In his presentation – ‘PIGB Outlook and Impact’ – the Director of the Institute, Prof. Wumi Iledare said the PIGB is important as it aims at creating efficient and effective governing institutions with clear and separate roles for the petroleum industry.

He said the bill further aimed at; “establishing a framework for the creation of commercially oriented and profit-driven petroleum entities that ensures value addition and internationalisation of the petroleum industry.”

In his presentation, ‘Petroleum Host Community Bill, PHCB, Outlook and Impact,’ Dr. Francis Adigwe, who is a consultant to the Senate Petroleum Upstream Committee, had stated that PHCB was also desirable because of its importance to all stakeholders.

Adigwe said; “they are mostly impacted by the activities and operations of oil and gas exploitation. They do not feel sufficient economic development arising from the proceeds of oil and gas production.

“Derivation and NDDC Act resources conferred on the state governments hardly trickle down to them. They are excluded from direct ownership by the Constitution of the Federal Republic of Nigeria.”

He said the demand included the amendment of the Constitution of the Federal Republic of Nigeria to confer ownership of petroleum resources on host communities and the conferment of all or part of concession rentals and royalties.

Noting that these and other efforts were insufficient, especially as they do not make direct impact on host communities, stressing that: “The development objectives of the initiatives have not delivered as intended – Derivation, NDDC, Amnesty, etc. “Government initiatives marred by poor  governance and corruption, exclusion of communities from the development process, host communities do not see themselves as joint-owners and custodians of petroleum assets.

The fund would also be utilised to provide medical facilities and personnel, undertake training, skills acquisition and other empowerment programmes, support local initiatives on environmental protection, support local initiatives on enhancement of security, invest certain part of available funds for future generations, secure funds and loans for specific projects and any other project for benefit of host communities.

Professor Eme Ekekwe, Department of Political Science, University of Port Harcourt had said: “I am pleased with progress being made by the National Assembly and other stakeholders to pass the bills.”

However, the Group Managing Director of the Nigerian National Petroleum Corporation (NNPC), Dr. Maikanti Baru, assured that the PIB, will be fully passed by the fourth quarter of this year.

In a statement issued at the recently concluded Offshore Technology Conference (OTC) 2018 in Houston, Texas, the Group Managing Director of NNPC, Dr. Maikanti Baru, had said: “We have assurances from our National Assembly that by early Q3, 2018 there will be light at the end of the tunnel. Its passage is important to help unlock billions of dollars of investments, which have been held up due to the uncertainty of its passage.”