FIDELITY Bank Plc has  unveiled a novel account opening initiative, as well as launched a new savings promotion campaign aimed at rewarding new and existing customers of the bank. The new account opening initiative, the first of its kind in the Nigerian banking industry, enables members of the public to open online savings accounts through a Quick Response (QR) code which can be scanned from any of the promotional materials such as roll up banners, fliers, posters and newspaper adverts.

This is expected to significantly ease the process of enrolment of new accounts and deepen the penetration of the new savings promo tagged; Get Alert in Millions Season 3 explained Executive Director, Shared Services and Products, Fidelity Bank, Mrs. Chijioke Ugochukwu, during the launch ceremony at the bank’s corporate Head Office  in Lagos last week. 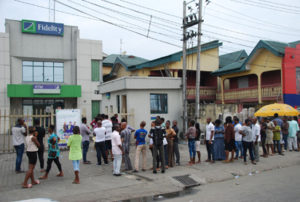 “This new savings promo is the eighth in 11 years. As with the previous ones, we are motivated to continue to empower our customers by rewarding them with cash and gift items, whilst at the same time promoting the savings culture, in line with the financial inclusion drive of the Central Bank of Nigeria (CBN)” said Mrs. Ugochukwu, who doubles as chairperson of the promo committee.

Speaking shortly before formally flagging off the promo, Fidelity Bank Chief Executive Officer,  Mr. Nnamdi Okonkwo thanked customers, stating that the bank is motivated to continue to incentivize them for their patronage.

He said it was imperative to acknowledge the contributions of customers to the growing fortunes of the bank.