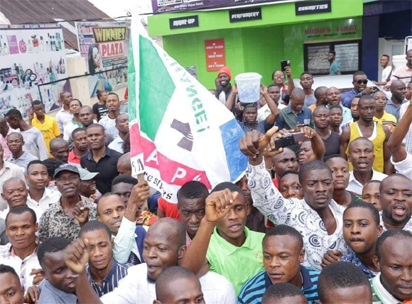 Leaders and elders of the All Progressives Congress, APC, in Lagos West Senatorial District have urged the Governorship candidate of the party, Babajide Sanwo-Olu not to underrate the strength of opponents in the 2019 governorship poll.

The elders, however, expressed no doubt in the ability of Sanwoolu coming out top as he remained the best candidate for the job in the state.

Members of the Governor’s Advisory Council, Alhaji Rabiu Oluwa, and Dr. Yomi Finnih, immediate past Lagos APC chairman, Otunba Henry Ajomale and immediate past Women leader of the party in Lagos, Kemi Nelson, among others fave the advice, yesterday, during, Sanwo-Olu’s ‘Thank you” visit to Lagos West Senatorial District leadership forum, in Ikeja, for supporting his candidacy at the just concluded primaries.

Speaking on the occasion, Oluwa, urged all the party members to be united and work together to ensure resounding victory for APC to win all elective positions in 2019 polls.

Oluwa said all the party members in the state should reconcile their grievances, especially issues surrounding the just concluded primary elections in the interest of the party as whole

Ajomale said the ruling party cannot afford to lose Lagos to the opposition party. “We have never lost Lagos State and we will not lose Lagos State. I was the state chairman of the party for 12 years and we never lost the state to opposition party. I want to implore all of us to work together to ensure Sanwo-Olu’s victory in the governorship election. We cannot afford to lose Lagos to Jimi Agbaje or any unworthy candidate,” he said.

Nelson, in her brief address, urged Sanwoolu not to rest on his oars following overwhelming support he enjoyed during the primaries but embark on reconciliatory and massive mobilisation of voters and residents to achieve maximum victory at 2019 polls.

Meanwhile, In his address, Sanwo-Olu, said Lagos West as the largest senatorial district in Lagos State is important to the party’s success in 2019 general elections and therefore implored all the party members to be united and work as a team for APC to achieve positive results in the state.

He assured the party leaders that his government will focus on the people, especially those at the grassroots through different programmes that will bring about development in the state.

Earlier, the Director-General of Babajide Olusola Sanwo-Olu Campaign Organisation (BOSCO), Mr. Tayo Ayinde, expressed confidence in Sanwoolu to further develop Lagos State and the people and therefore urged all the electorate to vote for the APC governorship candidate and other candidates in 2919 general polls..

Ayinde, also expressed no doubt in the ability of the Senatorial District which has the largest percentage of voters to deliver the largest votes in the targeted 2.5 million, which the campaign organisation planned to deliver for Sanwo-Olu in next year governorship election.