A fine democrat in military uniform, Col Gabriel Ajayi survived the late Gen Sani Abacha’s death sentence. His body was laid to rest on Friday in Lagos amid tributes from both true friends and his persecutors. 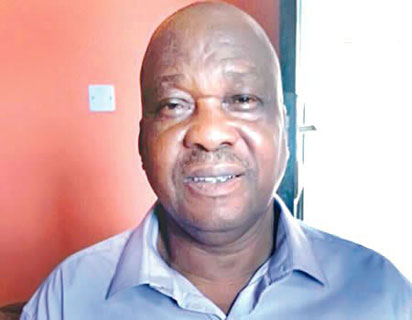 It was the darkest hours, usually before dawn. I heard the tinkling voices of little birds around the compound. The feeling was that drowsy suspense of ghostly thoughts between sleep and real life. His head was dust in white; I could see only his glowing eyes from the veil. He walked or flew in the void; then, he chorused this melody as he hovered in the room.

Swift to its close Ebbs out life’s little day; Earth’s joys grow dim; Its glories pass away; Change and decay in all. Around I see; O Thou who changest Not, abide with me. I woke up. Col Gabriel Ajayi had disappeared into the thin air. It was 4.30am. What was the problem? I was panting but brushed the encounter aside as another fantasy.

But hours later, his wife called. She had tried in vain to reach me immediately he breathed his last dose of air around 3.40am on that Sunday.

The previous night he had spent with a clergy man, discussing the floundering fortunes of Christiandom in a troubled Nigeria marred by corruption and poverty. The two rounded off their discussion shortly before midnight and bade each other ‘goodnight’. The second morning, the clergy man heard that his bosom friend with whom he shared the night had passed on at a private hospital in Lagos.

Last Friday, his body was lowered into the grave and some of his chief mourners were his tormentors, the military, that once sentenced him to death and took the shameful pride of locking him up in a cemetery for months, all alone, left to die, rejected, traumatised and trampled upon like a filthy rag.

Ajayi was one of Nigeria’s finest senior military officers, a soldier of the future. He spoke truth at a time when reality was defined by the wish of callous and villainous leaders. He paid a costly price. He was tortured. He was tied to the stake. Junior officers flogged him naked. They destroyed his manhood. They bruised him with red-hot iron made to pierce and trudge on his stomach, his nose, his eyes, his throat, his anus and even his tongue.

In death, he was described as a bundle of knowledge, honest and frank by the military representative. Yes, he survived his tormentors. He fought hard to live, though damaged sociologically and physically, until that Sunday when he was brought in, limping, by his only wife, Toun who stood with him like a cedar, till the end. He then muttered his last words “Let thy will be done.”

But the military, courtesy of the new found image, give him full honour this Friday with many of them praising his sense of duty, his honesty, his piety, his wisdom, his dexterity and even the wealth of his personal library described as the largest ever kept by any Nigerian military officer. But in Abacha’s days, that library was ransacked and destroyed, the books carted away and savagely used as toiletries by bullies.

The life and time of Ajayi, from the war tested family in Ijesha land, symbolized the tortuous history of Nigeria especially the notoriety of the country for laying in waste in the cemetery her best talents and allowing the dregs to run, ruin and decimate the country.

I have known Col Ajayi since his days in the military. He stood like a dogged, charming comet. He saw injustice and cried. He witnessed the persecution of truth. He wept. For a sadist gang that led the country at the time, tears were forbidden on the face of a ‘true soldier’ even when the command was hemorrhaging the country and the people, into a state of stupor. I was one of the first journalists that met him soon after his release from prison, after Abacha’s death. While in prison, I had established a link with him.

Later after he returned from prison, we had the opportunity of working together on the establishment of an intelligence-driven vigilante group in Nigeria to assist the police curb crime. We raised thousands of men. Ajayi would come every Wednesday to teach the men and women, for a period of nine years on intelligence gathering.

The group collaborated with security operatives in fishing out criminals. In Ekiti State, it was partly to his credit that in 2011, the state government was able to employ 800 young men, many from the retinue of our vigilante group that assisted the government in crime detection and prevention.

We worked daily. He worked hard and selflessly too. He was perpetually worried about the future of the country, the spate of violence and the way people have been abandoned to struggle for personal security in a vulnerable and bloody society.

He stood for the restructuring of Nigeria based on his rich personal experiences in the Army and in personal life. He once told me how his suspicion about the prospect of unity began in 1971 when he was enrolled into the Army and had to train at Ibadan.

He said the soldiers were forced to sing a song in Hausa, interpreted to mean “We are Kaduna soldiers.” He wondered why not ‘We are Nigerian soldiers” but his complaint to a senior officer then was met with sanctions. He fought ethnicity within the Army. He told me that one day on his way from ECOMOG in Liberia, there was a pro-democracy riot in Lagos.

He advised his boss to let the team wait at the MM Airport for the crisis to subside. His boss shunned him telling him they should shoot their way through.

“I could not count the number of the dead. They were so many. I started crying,” he told me. Back in the barracks, his boss told him if he had his way, he would “turn Lagos into ashes.” While in the Army, he told me he wondered why during ‘simulation wars’ in the Army ( an exercise that involves soldiers mimicking real war situation) the soldiers acting the South West and South East were always marked “enemy camp” while the far North was always presented as ‘Nigeria’.

He spoke his mind with rare courage and the highest sense of dignity. It was his defense of truth in a warped institution that brought trouble on his path, grief that tormented him until his last breath. The last time we met on his sick bed, he did not cease to express his deep worry about the Nigerian economic and political shipwreck. His illness arose from the years of torture.

He was always worried about Nigeria degenerating into a theatre of religious bedlam. Having served in Lebanon during the war, he knew how a peaceful country can suddenly face the violent clash of religious values.

As an infantry soldier, his career in the Army was as intriguing as the last phase of his life. Around 1995, Ajayi was in charge of the Lagos Garrison Command saddled with promotion, welfare and discipline among others. It was a turbulent period. One year after the June 12 election was annulled, the winner, Chief M.K.O Abiola, had declared himself as President.

He was appointed as Secretary into a military committee, chaired by Maj. Gen Lawrence Onoja to look into the annulment. Ajayi had areas of disagreement with the committee one of which was the red alert placed on some Nigerians including Lord Bishop Olubunmi Okogie. He looked the military in the face and called for handover. From then, he was marked.

On February 25, 1995, smartly dressed soldiers with deadly grin, stormed his house and changed the guards. They were intelligence officers from 26 infantry Battalion. The second day, a Sunday, he went to St Paul Military Church, Dodan Barracks with his wife and children for the Holy Communion with his boss, then Chief of Army Staff, Maj. Gen Musa Bamaiyi. Both knelt down beside each other to be administered the communion. In the evening of same day, the military ordered his arrest and detention. In the presence of his wife and children, he was bundled like a recalcitrant goat, into the Steyr military lorry.

He was not informed about his offence. The military had accused him of plotting to assassinate Abacha on March 1, 1995 at the Sallah praying ground, arrest all the GOCs and murder officers beyond the rank of a Brigadier in a series of lies piled up to degrade him.

He was eventually sentenced to death along with others. While in Minna prison, he met a medical practitioner, detained for falling out with Abacha who told him that Abacha had ordered all the prisoners, including former President Olusegun Obasanjo, to be eliminated because marabous had warned the caliph that one of the prisoners would eventually emerge as the President of the country. Abacha then took the path of Pharaoh: All the high-profile prisoners must be killed.

Ajayi wrote, “Gen Obasanjo told me that an insider informed him that Abacha had confided in him that even if any of us would come out alive, he, Obasanjo, Yar’Adua and Abiola would not come out alive. And it happened that the two died mysteriously in government’s custody.”

As his casket was being lowered into the point of no return on Friday, Ajayi’s words insistently rang in my ears: “I have always been a resourceful person, who wanted the world to taste of my talents. The bitterest tears shed over graves (funeral orations) are full of words left unsaid and deeds left undone.”

If I had the permission to write on his tomb, I would have inscribed the following words “Here lay the remains of one of Nigeria’s most honest military officers. Demeaned, chained and maltreated when alive. His bundle of knowledge lay here in waste.”