…State where losers threatened lives of delegates, asked for refunds of monies given out to buy votes

SOMETIME ago at a public function in one of the Niger Delta states, a former governor of the region recalled how a militant leader told him that government and politicians had kept telling them for decades that that things were in the pipeline, and having run out patience, the boys decided to start bursting the pipelines to see the things by themselves. 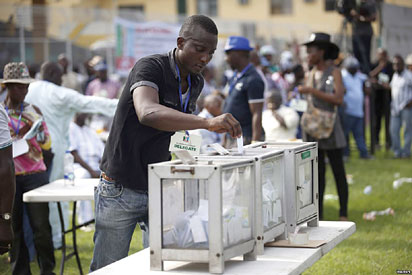 The import of the narrative is that what people cannot acquire by justifiable means, they apply force and deception, citing whatever reason to justify the end.

Bizarre way of getting party tickets

From the conduct of the last primaries by the political parties in Delta state, it is now obvious that politicians have introduced ingenious ways of getting the tickets of their political parties, including not just the use of militancy like their “brothers” in the creeks, but also dollars to woo delegates.

At the primaries of one of the All Progressives Congress, APC, in Delta South senatorial district, it was reported that one of the aspirants, himself a former militant leader,    unjustly screened out with other contenders, came with supposed militants, who fired sporadically into the air at the venue of the primaries to frighten party officials.

Party leaders scampered to safety but the deed had been perfected from above, the anointed candidate was announced as the party’s candidate to run for the position in the 2019 general elections.

At a rescheduled House of Assembly primary of the Peoples Democratic Party, PDP, in Delta state, last Friday, purported militants allegedly working for an aspirant, chased away party officials, including serving commissioners, delegates and policemen from the venue of the primary. They set ablaze a police Hilux van.

Similarly, at Emevor community venue of the APC’s House of Assembly primary election for the Isoko North constituency, a branded Sienna car belonging to one of the aspirants was set ablaze by suspected political thugs.

Raw power is also applied in place of militancy in some occasions. Like in the APC governorship primary in Delta state, all other aspirants except the preferred one were muscled out by the powers that be in the party.

One of the aspirants, Prof Pat Utomi, said he was simply told when he asked for the delegates’ list for the primary that it was a family matter and he should just be calm.

The warfare that was tagged primary was so intense that an APC House of Assembly aspirant for Sapele  constituency, Tuedor Akpevwe Jackson,  went to the “battleground” (read venue of primary) wearing a bullet proof vest.

Tuedor, who rejected the outcome of the result as announced by the Returning Officer, Chuks Erhire, told reporters in Sapele: “On the day of the primary, thugs loyal to one of the aspirants started shooting sporadically. This was sequel to an earlier threat by this same aspirant that he (my contender) would shoot me and the Director General of my campaign organization.”

“I had to wear a bullet proof vest on the day of the primary and true to their words, his boys embarked on a sporadic shooting at the venue of the primary to scare away authentic delegates in a bid to use their cronies to vote as delegates for the exercise,” he asserted.

In some of the primaries, it was both militancy and vote banditry. Some aspirants were so milked that at the end of the day, they were asking for refund of their money from delegates, who collected money and did not vote for them.

The primary was indeed a money-making event for delegates of the various parties, some aggregating up to N2million from different aspirants after collecting as much as N.5 million from one persons.

Recounting how he was made to refund a total of N1.4million, a delegate from Burutu North constituency, said two of the aspirants from the constituency who lost out at the primary, threatened to unleash mayhem on him and his family if he did not    refund monies collected for the exercise.

The delegate, who simply identified himself as Akpofieowie, said: “I did not compel them to give me the money and I was not the cause of their failure but I had to return their money to avoid trouble as they were threatening my life.”

The case was also the same for some delegates for Burutu South, Bomadi, Warri South West and Ughelli/Udu federal constituencies.

But it has not all been bad news from militant politicians, as a former leader of the Movement for the Emancipation of Niger Delta, MEND, Freedom Adowei, during the week, decamped from APC to PDP with his boys in the creeks, saying: “Under the PDP government of Senator Ifeanyi Okowa, riverine communities across the state have been receiving government attention more than ever, with some transforming into visible living communities.”

“If you go round, you will see how the governor is being commended for the construction of roads in riverine communities such as the Okerenkoko Road in Gbaramatu Kingdom, Warri Southwest, Sokebolou-Obotobo Road in Ogulagha kingdom, Burutu Township concrete road pavement and others…” he added.

At Agbor, Ika South local government area, against what several sources said was the instruction of the state governor, Senator Ifeanyi Okowa, aspirants did everything to outspend each other in dollars to buy votes in the PDP House of Assembly primary.

One House of Assembly aspirant gave each delegate $300, while the one that carried the day gave $600 each.

A day after the primary in Agbor, Hausa men operating the local Bureau De Change, along Okoh Street, Agbor, were overwhelmed with the influx of customers with dollars and they complained they did not have enough naira to match the demand.

The House of Representatives primary of PDP in Anioma/Oshimili federal constituency ended at the Police Headquarters in Asaba when gun shots boomed during the counting.    One of the aspirants, who perceived that the counting was not going as planned, stormed the arena with security officials, caused an uproar that made officials to relocate to police headquarters to complete the sorting and counting of votes.

It was the handling of the matter by the Commissioner of Police, Mr. Muhammad Mustafa that enabled the counting to be completed at the police headquarters with Elumelu emerging winner.

Mrs. Amaechi Mrakpor, the  lawmaker representing Aniocha/Oshimili federal constituency in the House of Representatives, who lost the PDP primary to Mr. Ndudi Elumelu, accused him of giving $1,500 each to over 500 delegates, an allegation that Elumelu debunked.

She told reporters    that there was an agreement to make provisions for delegates as was done for the Senate primary with each aspirant not exceeding a maximum of N100,000, adding:    “On the night of October 1, some delegates from my local government informed me that another aspirant was giving delegates $1,500.”

She also said:”He came back and started campaigning to the delegates while voting was going on. After doing that, he brought out Ghana-must-go bags and started sharing jollof rice and chicken and nobody cautioned him.

“I was trying to be obedient. He shared about $800,000 and just that morning, he went out again to share more money for breakfast. Nobody stopped him.”

I distributed neither dollar nor rice – Elumelu

Reacting, Elumelu reportedly told newsmen: “There is absolutely no truth in her claim; I never induced delegates with $1,500 each. Let me clearly state that I was seated from the beginning to the end; I could not have been campaigning or carrying rice to serve people.”

“Even in national convention or zonal convention, they serve people refreshment, which does not mean it is Ndudi Elumelu that served the food and drinks. Let us stop these petty allegations. What is the truth is that the people have made their choice, and we should accept it,” he said.

When Saturday Vanguard got in contact with Elumelu, last Saturday, he sent a text message that he was at Port Harcourt for the just concluded national convention of his party, on another occasion, Tuesday, he said: “Sorry, I can’t talk right now.” It was, however, learned that authorities of the party were addressing the matter and he just would not want to make further comment until certain decisions were affirmed or otherwise.

Not a few Deltans are, however, afraid that with the naked display of militancy and dollar by politicians in the primaries, the general election in 2019 would be a do or die affair. Though, the police arrested a  serving councilor and five others in connection with the incident and also summoned some top politicians suspected to be behind the burning of police van in Ethiope East, the Command must be more proactive in future.

At the time of writing this report, Ethiope East is probably the only constituency where PDP has not nominated a House of Assembly candidate because of the new-fangled confrontational politics in the state.

A situation where thugs (read militants) were able to overawe supposedly armed policemen deployed to provide protection for participants in a party primary and burn their vehicle is unbecoming and such calamity, including the accidental discharge that killed a student and left another hospitalized at one of the APC primaries in Asaba is indeed a shaky signal.