A top football referee and a club executive were on Thursday among the first suspects charged in a massive fraud and match-fixing scandal that has engulfed Belgium’s elite league. 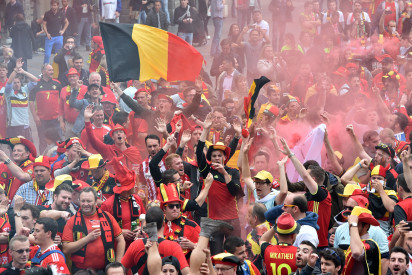 Prosecutors said more than 20 suspects were being investigated a day after hundreds of police carried out 44 house searches across Belgium, France, Luxembourg, Cyprus, Montenegro, Serbia and Macedonia.

A total of 28 people were arrested on Wednesday in Belgium and another suspect was detained on Thursday morning, the federal prosecutor said.

The judge in charge of the case has also issued European arrest warrants to seek the extradition of suspects detained abroad, a spokeswoman for the federal prosecutor’s office told reporters in Brussels.

The investigation is focused on some of Belgium’s best known football agents, including Mogi Bayat, the former manager of Sporting Charleroi, who was arrested in his home on suspected links to crooked transfer deals.

Another agent, Dejan Veljkovic, is suspected of both fraud and match-fixing.

Suspicions of match-fixing emerged during the fraud investigation, with a focus on matches played in the 2017-18 season, prosecutors said.

Veljkovic is alleged to have engineered a match-fixing scheme with a Belgian referee in a failed effort to save club KV Mechelen from relegation.

The Mechelen financial director, Thierry Steemans, has been detained and charged in the match-fixing case, prosecutors said.

The searches were carried out at the headquarters of nine football clubs, including Mechelen, Anderlecht, Club Brugge, Genk and Standard Liege.

– ‘No money-laundering’ –
Club Brugge coach Ivan Leko, whose team is playing in the Champions League this season, was released after questioning on Thursday and charged.

“There is discussion about a part of his salary from a number of years ago and whether that has been correctly reported to the tax authorities,” his lawyer Walter Van Steenbrugge told AFP.

“There was no money-laundering in a criminal sense,” the lawyer added.

In Belgium, various objects were seized including luxury watches, jewellery and cash.

Empty boxes intended for luxury watches worth a total of 8 million euros were also found.

Abroad, documents and safes were seized and bank accounts frozen, for a total of 3.6 million euros.

In Serbia, according to media reports, the Belgrade High Court ordered the extradition of a Montenegrin national, an agent active in football.

The suspect is wanted by Belgium, which suspects him of corruption and money laundering. He was interrogated on Wednesday evening.

The investigation started in late 2017 as a result of a report drawn up by the Sports Fraud Cell set up by Belgium’s federal police.