NSCIA fumes over murder of Muslims in Plateau communities 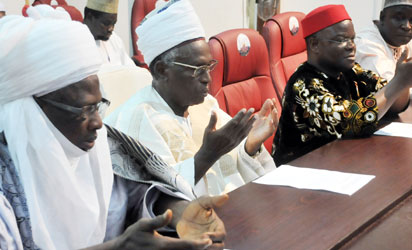 The Nigerian Supreme Council for Islamic Affairs, NSCIA, under the leadership of its President-General, the Sultan of Sokoto, Alhaji Muhammad Sa’ad Abubakar, has expressed shock over the tragic bloodbath and savagery going on in Plateau State.

Sultan Abubakar noted with dismay that the formerly haven of peace and a pride to the nation, Plateau State, has relapsed into a state of anomie and intractable violence.

In a statement signed by the Deputy Secretary-General of the council, Professor Salisu Shehu, the Sultan said: “Formerly a haven of peace and a pride to the nation, Plateau State, especially the three Local Government Areas of Barkin Ladi, Riyom and Jos South, has relapsed into a state of anomie, a condition of intermittent, internecine and seemingly intractable violence.

“At the centre of this horrible and extreme criminality are the Berom non-Muslims, a bunch of evil and deadly ethnic supremacists whose brazen show of cannibalism astounded the world when they slaughtered, burnt and ate the flesh of several Muslims about a decade ago when the worshippers were waylaid at a major Islamic festival. It is the same terrorists that have turned Jos to a theatre of carnage again with the unbelievable discoveries being made in Lafendeg Du pond, where the car and belongings of a General of the Nigerian Army, Idris Alkali, were criminally deposited, among other traces of unimaginable horror.

“NSCIA condemns in the strongest terms the unspeakable disappearance of Major-General Idris Alkali (rtd). We remonstrate the gruesome murder of several other Muslims, including Zayyanu Shallah, Manager, Department of Universal Service and Provision Fund, Nigeria Communication Commission, NCC, and Jubril Mailafia, an award-winning Film Editor and Animator, in the same community.

“As responsible and civilised people, we must all collectively and unanimously condemn the killing of innocent souls regardless of whoever is perpetrating it and or whoever may be the victim. All human souls are sacred and they must be equally protected and valued. The usual silence of some self-styled religious leaders when their people are the perpetrators of crime and their cantankerous posturing and raucous cacophony  when their followers are perceived as victims of mayhem smack of hypocrisy and wickedness in the sight of God and indeed, in the sight of all just, fair and humane people.

“In the face of this unsavoury and sense-numbing development, we are dismayed and appalled that the media have chosen to remain hypocritically silent and ignominiously disinterested, understandably because, and as it has often been the case, Muslims are the victims.

“If it were to be the so-called herdsmen attack, though it is the same anarchists that often disguise as herdsmen to give a dog a bad name in order to hang it, the media would have been awash with sensational headlines, mischievous reports and obnoxious hyper-analyses.

“Now, we strongly demand that the Federal Government hold the people living in the communities around the Lafendeg Du pond responsible for the disappearance of General Alkali and the ordinary civilians whose lives had been gruesomely terminated. The guilty conscience of these terrorists and cannibals had made them to use their women to attempt stopping the search of the pond.

“The leader of those barely-clad women and her co-travellers should be arrested immediately and investigated to determine their actual motive and culpability in the disappearance of the General and the death of others.

The Council praised the efforts of the Federal Government and Governor Simon Lalong, at entrenching peace and stability in the state.

“At least, his own administration, in the last three and a half years, until the past few months, is different from what obtained in the immediate past administration in the state when the State Government was not only brazenly taking side but was also culpable in certain situations. The former Governor should be able to assist the authorities in their investigations as a federal legislator had revealed on the floor of the National Assembly, even while citing security concerns for his own life, how mercenaries and terrorists had been trained abroad by politicians to kill, plunder and massacre.

It also commended the Federal Government, saying that in spite of the daunting challenges the military faces from the corrupt and conflict entrepreneurs, appreciable progress and achievements have been recorded in addressing the various challenges of insecurity in the country.

“We acknowledge the doggedness and resolve of the military in unearthing the facts surrounding the disappearance of one of their own,” the council said.