The Italians who had only manage one win in their last nine matches started on the right path, enjoying plenty of the ball possessions with the attacking trident of Federico Bernardeschi, Federico Chiesa and Lorenzo Insigne causing the Ukrainian defence  problems. It was the latter who came closest with a curling shot which demanded slightly more bend to beat the goalkeeper. 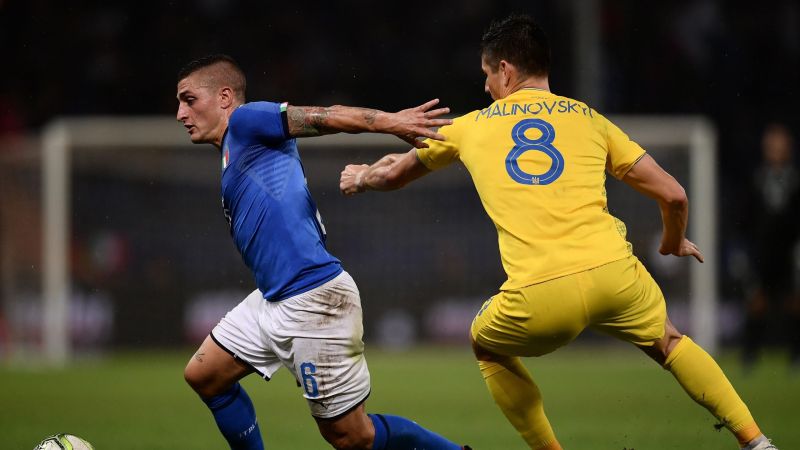 Ukraine had goalkeeper Andriy Pyatov largely to thank for the clean-sheet at the half-time break but the Shakhtar Donetsk shot-stopper went from hero to zero after the restart when he allowed Bernardeschi’s weak effort to beat him.

Italy’s midfielder Marco Verratti leaves the pitch to be substituted during the friendly football match Italy vs Ukraine on October 10, 2018 at the Luigi-Ferraris stadium in Genoa.

The visitors, however, weren’t behind for long when they grabbed an equaliser out of nothing, Ruslan Malinovskiy converting from close range after the Italians failed to deal with a corner delivery.

Ukraine coach Andri Shevchenko may even have capped his return to Italy with a stunning victory: Malinovskiy rattled the crossbar with a free-kick, while substitute Taras Stepanenko brought out a great save from Gianluigi Donnarumma.

Ciro Immobile spurned a couple of late chances as Italy were forced to settle for another draw and another frustrating result. Roberto Mancini’s side have won only once this calendar year, scoring just six times with two goals coming against Saudi Arabia in a friendly.