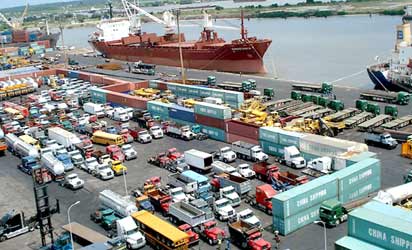 THE management of Nigerian Ports Authority (NPA), has threatened to sanction CMA CGM over the unilateral imposition of 400 dollars on shipments to two ports of Lagos, and any other international shipping line that may introduce arbitrary charges at ports.

In press statements sent to Vanguard, yesterday, NPA and leadership of association of clearing agents, condemned the $400 congestion surcharge the international shipping line slammed on every container, coming to TinCan Island and Apapa ports.

The shipping line had based its action on what it called disruption of its activities based on congestion in the two Lagos ports.

The company had explained that: “port congestion at Lagos ports, Nigeria, is currently increasing our operational costs and generating severe service disruption for several weeks.’’p

However, the Acting General-Manager Corporate and Strategic Communications, NPA, Mr Isa Suwaid stated that the new charges cannot stand following the authority’s checks, which revealed that some of the shipping companies have failed to fully comply with the directive to acquire and operate holding bays as they have either failed to utilise their holding bays at all or do not have adequate capacity to handle the volume of containers that they deal with.

He noted that: “These conducts have contributed to the persistent congestion around the Lagos Port Complex and the Tin Can Island Port, spreading to other parts of the Lagos metropolis where truck drivers with no immediate business at the ports now park their trucks.

“The authority will review the level of compliance to its directives and determine further actions in addition to this, the NPA will henceforth embark on a regular compliance check of the operations of holding bays by shipping companies and terminal operators and defaulters will be sanctioned.”