THE  governorship poll in Osun has come and gone. The election was won and lost. The winner was gallant in winning. Whether the loser would be honourable in losing is not yet certain given the peculiar nature of our politics where a loser always alleges foul play and scream blue murder. 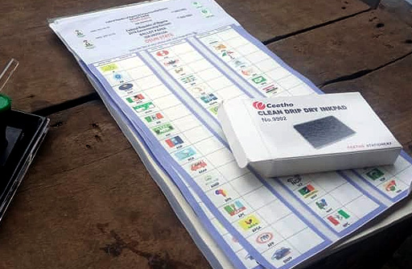 The All Progressives Congress, APC, candidate won the election, defeating its closest rival from the People’s Democratic Party, PDP. The APC candidate, Alhaji Gboyega Oyetola, polled 255,505 votes to defeat his main rival, Senator Ademola Adeleke, who scored 255,023 votes. The victory did not, however, come easy.

The victory was long in coming as APC was almost denied its victory. The whole state had to wait with bated breath for a re-run election in seven wards across four local government areas when in fact the candidate of the APC ought to have been declared winner!

Yes, that is the actual position instead of the re-run as decided by the Independent National Electoral Commission, INEC.

Now, with the benefit of hindsight, it is safe to conclude that the election was won at the first ballot by APC. Then why the re-run in the first place?

From the legal point of view, what the constitution says is that a candidate for the election of governorship seat with the highest votes (what is called a simple majority) should be declared winner in such election.  Section 179. (2)(a) and (b) of the Constitution of the Federal Republic of Nigeria 1999 (as Amended says: “A candidate for an election to the office of Governor of a State shall be deemed to have been duly elected where, there being two or more candidates –

(a) he has the highest number of votes cast at the election; and (b) he has not less than one-quarter of all the votes cast in each of at least two-thirds of all the local government areas in the State.”

Looking at the letters of the above section of the constitution, the APC candidate fulfilled the criteria required to have been declared the winner at the first round of the ballot.

Rather, acting on a misplaced inquisition, INEC subtracted more than one thousand votes firm the APC votes. The reason given was that the total figure recorded for the APC in one of the local governments was inflated by a thousand votes. When in fact the figure contained in the Form EC8A was the figure the party acted on in calculating its votes.

The said Form EC8 was properly filled and figures recorded accordingly by the presiding officer. Not only that, all the party agents in the affected local government areas signed the result before it was brought to the State Collation Centre.

This singular act of irregularity was rather callous and unjustified. It denied the APC its victory. The victory songs and dances across the states had to stop abruptly! All the same, even though painful, APC agreed with the INEC’s decision because it believes in strict adherence to democratic ethos, election being one of such ethos. It was these huge votes that was removed from the APC tally bag that gave the PDP opportunity of shooting forward by 353 votes.

Suddenly, PDP started counting its chicks before they were hatched to the effect that it had won  the election and so should be declared winner by the electoral umpire.

The hunter thus became the hunted in the jungle of political buccaneers. There were a lot of pressures and muffled threat that INEC had better declare its party, PDP, the winner of the election or heaven would be let loose.

Wisdom, however, prevailed when INEC declared the election inconclusive, hinging its decision in the provisions of Electoral Act 2010 (as amended). Yet, the undemocratic forces screamed blue murder. INEC’s decision probably violated their sense of brigandage and utter disrespect for democratic due process.

The question then is: Was INEC right constitutionally in declaring a re-run? The answer couldn’t have been anything than affirmative. A glance at the Electoral Act and Manual for Electoral Office clarify this and vindicated INEC in arriving at the decision. Section 53 subsections (2), (3), and (4) states: “ (2) Where the votes cast at an election in any polling unit exceed the number of registered voters in that polling unit, the result of the election for that polling unit shall be declared void by the Commission and another election may be conducted at a date to be fixed by the Commission where the result at that polling unit may affect the overall result in the Constituency.

“(3) Where an election is nullified in accordance with subsection (2) of this section, there shall be no return for the election until another poll has taken place in the affected area.

“ (4) Notwithstanding the provisions of subsections (2) and (3) of this section the Commission may, if satisfied that the result of the election will not substantially be affected by voting in the area where the election is cancelled, direct that a return of the election be made.”

In the case above, there is no way the removal of more than one thousand votes and the cancellation and voiding of over 3,486 votes would not have a substantial effect in the winner of such election.

The provision in the Manual: Chapter 3 paragraph 3.11, step 14 of the Manual for Election Officials (updated version) at page 325 of Volume 1 of the record provides: “3.11: Final Collation and Declaration of Governorship Election Results at State Level: The State Collation/Returning Officer for the Governorship shall:

Step 14: “Where the margin of win between the two leading candidates is not in excess of the total number of registered voters of the polling unit(s) where elections were cancelled or not held, decline to make a return until another poll has taken place in the affected polling unit(s) and the results incorporated into a new Form EC8D and subsequently recorded into a new form EC8E for Declaration and Return.”

This provision explains the justification of INEC’s decision to order for a rerun.

It is even more necessary to point out here that this is not the first time INEC has taking this statutory path and had judicial approval even at the highest court of the land. In the case of Faleke vs INEC and others, the Supreme Court said: “The relevance of INEC’s Manual for Electoral Officers in the proper conduct of elections was acknowledged by this Court in the case of C.P.C Vs INEC (2011) per Adekeye, JSC thus:

“By force of law, the Independent National Electoral Commission has the duty of conducting elections. Besides the constitutional provisions, it is guided by the Electoral Act 2010 (as amended) and the Election Guidelines and Manual issued for its officials in accordance with the Act. These documents embody all steps to comply with in the conduct of a free, fair and hitch-free election.”

Thus, the argument that resort to its manual in the circumstances by INEC amounted to a flagrant disregard of the supremacy of the constitutional provisions as contained in Section 179(2) is invalid.

Rather, a combined reading of the section of the constitution, Section 53 of the Electoral Law and the INEC Manual gives better interpretation of the above scenario since the other two laws are not in any way inconsistent with the constitution which is the grund norm.

They only complement the constitution.

Now to some precedents, in 2015, the late Abubakar Audu of Kogi State was leading by 240,867 votes to PDP 199,514 votes, the margin of 41,353 favoured APC but it was declared inconclusive.  Rerun was fixed because 49,953 cancelled votes were higher than the 41,353 even though APC was leading with what is called a giant margin!

In the Imo Governorship election in 2015, Rochas Okorocha (APC) had 385,671, while Emeka Ihedioha (PDP): 306,142. The margin of victory was 79,529 and the cancelled votes was 144,715. From the above, it is evident that the margin of victory was lower than the cancelled votes, a number that is enough to alter the balance. The Commission under Professor Attahiru Jega did the needful and promptly declared the elections inconclusive.

Take note that the PDP, the ruling party then hailed the decision and applauded the decision of the INEC, describing it as “patriotic and sound decision.”

A similar situation happened in 2011 in the same Imo between Rochas Okorocha and Ikedi Ohakim where INEC had declared the elections inconclusive because elections did not take place in some wards.

In the Anambra Senatorial Election in 2011, the late Prof. Dora Akunyili (APGA) had secured 66,273 as against Chris Ngige’s (ACN) 65,576 with the margin of 697 separating the two contestants. In this instance, INEC declared the elections inconclusive because elections were cancelled in some wards with a voting population that was clearly higher than the margin of victory. A re-run took place which Akunyili lost.

Another instance was the Bayelsa gubernatorial election in 2015. Seriake Dickson (PDP) polled 105,748, while Timipre Sylva (APC) got 72,594 with 33,154 margin separating both contenders. In the case of Bayelsa, an election had taken place in Southern Ijaw which had Sylva winning the entire 120,000 votes in that area, but INEC refused to accept it, declared it inconclusive and ordered a re-run because the number of registered voters were clearly more than the margin of victory. The PDP received this news well and celebrated it.

Then came the case of Anambra in 2017 where Governor Obiano (APGA) secured 174,710 to Dr. Tony Nwoye (PDP): 94,956 with the margin of 79,754 while 113,113 were cancelled. Again, the Commission declared the election inconclusive, and the PDP celebrated it as a bold move. All these are justifiable cases which corroborated the decision of INEC in the just concluded election in Osun.

Looking at the re-run from another point of view, the inconclusivity of the election fitted the essence of participatory politics. After all, democracy offer every citizen the right to exercise his or her civic right, without let or hindrance. It follows therefore that if elections are cancelled for whatever reasons by the Electoral umpire, those people affect must be given a second chance to cast their ballot. Denying this inalienable right would be undemocratic. And this is what INEC did, having regard to Section 152 (3) of the Electoral Act.

Morality equally demands that the election be declared inconclusive until cancelled poll be re-conducted.

If PDP feels its hands were not criminally soiled during the election, the best place for it to go is the court of equity! And with its clean hands if it has any!

Kunle Owolabi , an attorney at law, writes from Lagos.