Boxing is a pioneer sport in Nigeria that predates the country’s independence. As a British colony Nigerian boxers made hay, when boxers from other Anglophone countries  were yet to come to grips with modern boxing. As early as the 1950s, Nigerian boxers won global recognition and laurels for the British colony. Boxing used to be the most popular sport in Nigeria until the 1960s but completely disappeared from view until the beginning of the 2000s.

Richard Ihetu, popularly known as Dick Tiger was the middleweight title holder in 1962

In 1965 Dick Tiger took the world again by storm when he reclaimed his world welterweight crown after a unanimous points victory over Joey Giardello at the famous Maddison Square and he also held the light-heavyweight belt in 1966.. They were the two shinning lights that shaped the tone for Nigeria’s subsequent achievements and dominance in both regional and global boxing scenes. Boxing was popular across many former British colonies but Nigeria differed in its wealth of generous local sponsors.

He rose to prominence in his early career following a string of knockout wins. In March 2008, Peter won the WBC world heavyweight championship by knocking out Oleg Maskaev. In October, in what would be his only defense of the title, Peter lost to a returning Vitali Klitschko, who stopped him in eight rounds.

Peter Oboh, a former British, Commonwealth and World Boxing Association (WBA) Inter-Continental light heavyweight champion said Nigerian boxing was at its best in the 1970s and the ’80s. Boxers then were heroes and the media publicised them and they were like cult figures and had a lot of fans.”

Oboh is one of the numerous Nigerian boxers who fought and won laurels for other countries. They were many like him.

Nigerian boxers who have won laurels with dual citizenship or as citizens of other nations were also numerous. Boxers like Henry Akinwande, former WBO heavyweight champion, Akeem Anifowose, Ike Ibeabuchi, James Oyebola among others.

At the amateur level, Nigeria announced her entry into the boxing world through Nojeem Maiyegun who, in 1964 won the country’s first Olympic medal, a bronze at the Tokyo Games. It tuned out Nigeria’s only medal at the Games.

Of the 25 medals Nigeria has won in the Olympics, 6 are from boxing. In 1972 the same scenario played out again as  Isaac Ikouria won bronze medal and, like in Tokyo, it was Nigeria’s only medal at the games.

At Atlanta ’96, Duncan Dokiwari won a bronze in the men’s Super Heavyweight class.

The arrival of military governments from the late 1960s however brought an abrupt end to boxing’s popularity as a succession of leaders saw no international prestige in it.

Within a few years, Nigerian boxing collapsed due to lack of sponsorship.

However, everything seems to have changed because of the entry into the Nigerian boxing scene by GOtv.  Adewunmi Ogunsanya, the head of the satellite television platform Multichoice Nigeria and his

GOtv channel have been organising regular “boxing night” since 2014, which is watched by millions across Africa.

The 2016 winner, Olaide “Fijaborn” Fijabi, took home a cheque for one million naira which was the top prize for the most valuable boxer on the night. This amount has vacillated from time to time as some winners have taken home as much as N1.5 m. It is a prize named after Moji Ogunsanya, the late wife of MultiChoice chairman and it goes with a trophy, 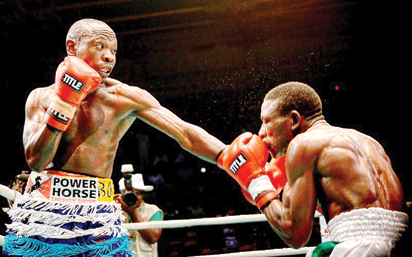 Fijabi told the media that before his victory that he never wanted to turn professional because there were few opportunities to fight and no promotions.

But he added: “I hope to be a billionaire boxer, win the world title and be talked about the way great boxers are talked about. That is my aspiration.”

In a few days, Fijabi is expected to take on a Senegalese opponent for the defence of his title and a possibly pave the way for a shot at the Commonwealth crown, thanks to GOtv Boxing Night.

This was made possible through the platform offered by the television network.

“This country is blessed in terms of talent because we have the boxers in every weight category but what we lack is the funding and regular promotions,” Oboh said. He argued that what GOTv is doing for the revival of the sport should be replicated by other corporate bodies in order to put Nigeria back to where it belongs.

“I would love to see rich Nigerians do what late Chief M.K.O.Abiola used to do for Nigerian sports. He was committed and unflinching in his support for sports,” Oboh emphasised.