Wilder, Fury pump up volume ahead of Dec 1 heavyweight clash

Deontay Wilder and Tyson Fury were at it again on Wednesday, pushing and shoving and trading barbs as their three-city promotional tour for their heavyweight world title fight hit Los Angeles. 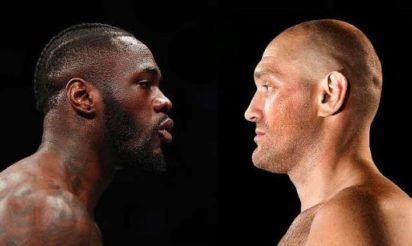 Two days after their London press conference was broken up after they traded shoves, the two scuffled again and were separated by their teams at L.A. Live’s Novo Club — just a stone’s throw from the Staples Center where they’ll battle for Wilder’s World Boxing Council heavyweight world title on December 1.

Fury, unbeaten in 27 professional fights, made his comeback earlier this year after a near two-and-a-half year absence.

He was unstinting with his insults Wednesday, urging Wilder to clean his teeth as he animatedly walked the stage.

Verbal jabs from both were lost as they shouted over one another, standing nose to nose.

When the shoving started the two were pulled apart.

Wilder acknowledged that it was all good theater — but he never intended to let it go too far.

“Who on stage is going to be able to hold two big fighters back?” he said. “If I want to, I’m going to get you. But then you jeopardize the fight, and I don’t want that.”

The fight will be the first US pay-per-view appearance for both fighters, and Joshua (21-0 with 20 knockouts) will be under pressure to fight the winner next April when he has a reserved date at Wembley Stadium.

Wilder, shaken up before pulling off a 10th-round stoppage of Cuba’s Luis Ortiz in March, says he’ll be the champion fans are clamoring for Joshua to meet.

“He’s feeling the pressure,” Wilder told the Los Angeles Times of Joshua. “When I beat Fury, it’ll be a hell of a lot of pressure.”

In the meantime, Wilder told the Times, he’s looking forward to Fury.

“It’s going to be an interesting, challenging fight,” Wilder said. “We’re each going to get hit. It’s about who can withstand it.”