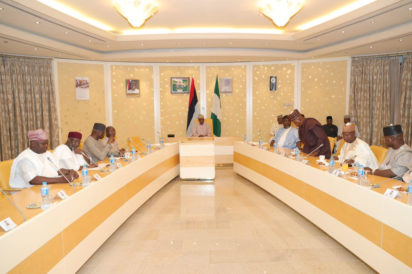 President Muhammadu Buhari on Thursday met with State governors on the platform of the ruling-All Progressives Congress (APC) at the Presidential Villa, Abuja.

Although the agenda of the meeting was unknown, a presidential source told Newsmen that it may not be unconnected with the political developments in the governors states.

The  APC governors were not happy with the decision of the National Working Committee (NWC) of the party on the primaries in their respective states.

Some of the governors are also not comfortable with the party’s decision to offer automatic tickets to some lawmakers because of their loyalty during the mass defection to the opposition parties.

It would be recalled that two of the APC governors, Malam Nasir el-Rufai of Kaduna State and his counterpart of Ondo, Mr Rotimi Akeredolu met with Buhari on a similar mission.