By Dayo Johnson
Akure—NO fewer than five persons, including a toddler, were feared dead last night in Akure, the Ondo State capital, after a tanker laden with 33,000 litres of fuel fell, and started a fire that razed eight vehicles, two buildings and shops. 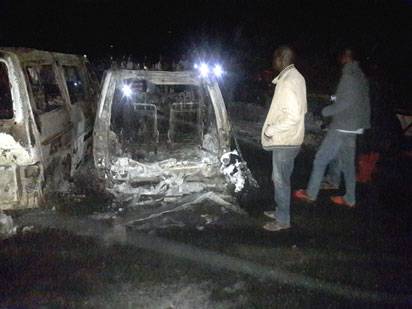 The number of the passengers in the affected commercial bus could not be ascertained at press time, but the five persons that reportedly died were trapped inside their vehicle when the fire caught up with them.

Several vehicle owners abandoned them as the fire spread in different directions and razed all the structures in the area.

It was gathered that the tanker driver, while trying to avoid a head-on collision with another vehicle at the junction, lost control and fell on the vehicle, spilling its content which instantly went up in flame.

Vanguard learned that the tanker driver was on his way to a nearby filling station to discharge product when the incident occurred, which razed about five shops and two buildings along Irese Road. Many motorcycles were also burnt.

Vanguard learned that distress calls to the men of the state fire service failed to yield any result. But men of the service later showed up when the fire had subsided.