Robbers attacked OGITECH students with charm and were caught

Rumour has it that Some students were rubbed at the hostel of Arch. Ogini, the dean to school of environmental school, OGITECH, Igbesa on Saturday 7th April, 2018 leaving a female student injured while another student was hit with a charm. 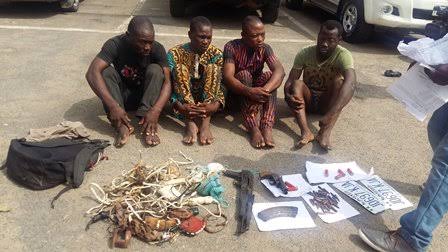 Information gathered from a narrator revealed that the robbers who happened to be about five (5) ND students were blocked on their way back from the hostel by some other sets of students and made sure one of the culprits was arrested and detained in the police station.

According to the narrator;

Sdot (A student) and some other students block them on their way back from the hostel, but due to the weapon that was with them, other students that were with Sdot ran away leaving only Sdot who faced them with just a stick , he was able to defeat them though, but dey all escape.

But while he was engaged in the fight, there is one particular boy he hit with the stick seriously, I think the boy later went to hide in one uncompleted building because the stick really hit him, after few minutes, Sdot went ahead in searching for the boys and he was able to catch the one who went to hide in an uncompleted building and took him to Igbesa Police station for the night and transfered to Agbara Police Station the next day which was yesterday, 8th April, 2018.

After several beating at Agbara Police Station, he was able to confess, and many of our students were mentioned.

The painful part is that, the boy is an Nd 1 Bus Admin student.

Even a female students was injured in the hostel with their cutlass, while one boy was hit with juju, that one come dey sleep like tomorrow no dey

Most of d names mentioned were ND students, and he confess that they’ve been doing this for a long time.

It is no news that the Rector of the school, Engr. Dr. Mrs. Olufunke Akinkurolere has zero tolerance for students caught in any violent and immoral acts as she had warned student not to engage in any activity capable of truncating their academic pursuit and that any student caught in the act would be penalized ranging from suspension to rustication.

This was announced on the School’s 12th Matriculation Ceremony