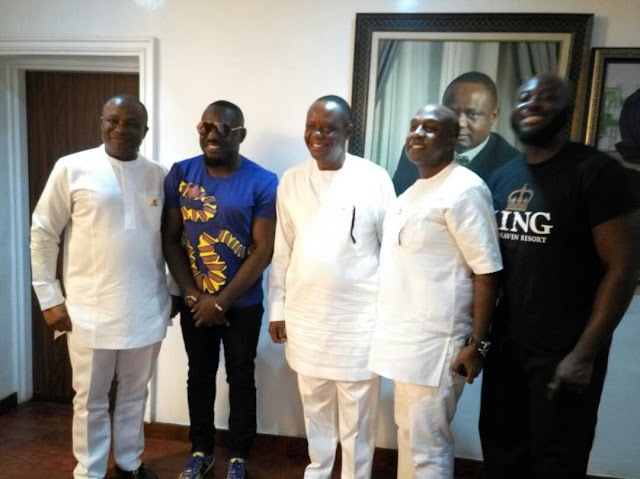 Nollywood’s original black belt holder, bad boy and lover-man, Jim Iyke, has landed in Benin city for the ‘Benin rising’ world premiere of the next romantic movie after Titanic, ‘Loverbirds’.

Upon his arrival, his first point of call was the visit of Chairman of Wells Entertainment Ltd and Wells Carlton Hotels and Apartments, Capt Dr. Hosa Okunbo, in his private residence in Benin.

Still yesterday, he was at the special screening of Loverbirds at Kada cinema, Benin.

After which there was an exclusive after party event at Emirates Lounge.

He will also be at the screening today Saturday April 7, 2018 at cartage Cinema, Asaba.

Jim was also joined this morning by the male lead of the movie, Felix Omozusi, who played the real lover man. He flew in from New York his base early today.

This will be happening as the official release date of extraordinaire movie ‘Lovebirds’ massive momentum.

The movie which cinema pundits have tagged to be the next great love story to happen after ‘Titanic’ will be hitting the cinemas nationwide on Friday April 13, 2018 after series of premieres across the nation.

There will also be premieres in Asaba, Owerri, Akure, Ibadan and Lagos where Jim Iyke will be meeting his fans to sign autographs.

‘Lovebird’ a one location film with about 6 characters and one voice over, is bringing to the scene again the original all time Nollywood’s bad boy, Jim Iyke and unraveling delectable actress Stella Damasus after a long break, Joseph Benjamin in Atlanta, Georgia, USA.