that ass wasn’t mine, I don’t know where he got that from thank God I don’t have any naked pics with him that his how he will post it. That is y I don’t send nude pics to anybody be u who that person is to me. So please I want you to understand that, 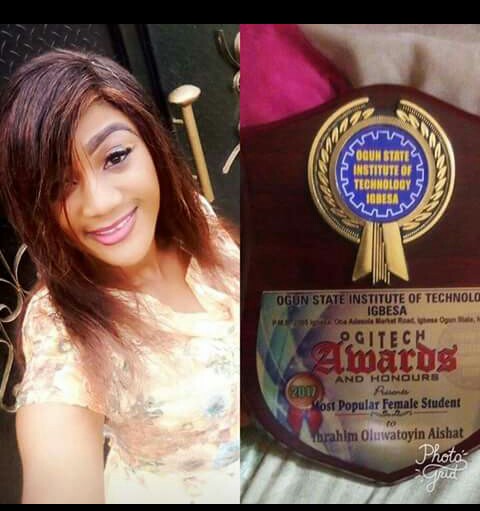 For those that are on our whatsapp group chat, I’m sure y’all remember the allegation made on an OGITECH Facebook user Adebimpe Ariyike Cares by one Ola Para Nwnl. Well, the story and truth behind the whole issue has been revealed.

On Wednesday 13th December, 2017 a Facebook user called Ola Para Nwnl dropped some hilarious comments on a post whose headline was directed to Lists of Nominees for OGA 2017 in our Facebook page, this was after he posted an allegedly “Boiled Ass” of Adebimpe Ariyike Cares.
The comments says:
She was a student in your School. That was her boil Ass, Your school gave award of the most popular to this girl cause she was a popular prostitute he further said; I found the pic on someone’s timeline. She broke up with the guy because the guy couldn’t bare a waywardness.

Hmmm… Anyways, while we tried to make this known to the victim by sharing the post link on our whatsapp page, the guy abruptly deleted the whole comments and picture unknowingly to him that we have screenshot it already. See screenshot below> 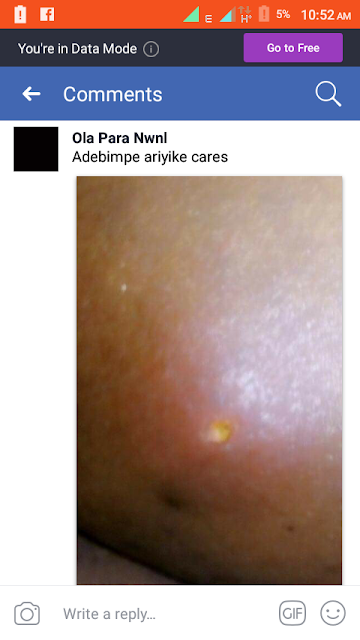 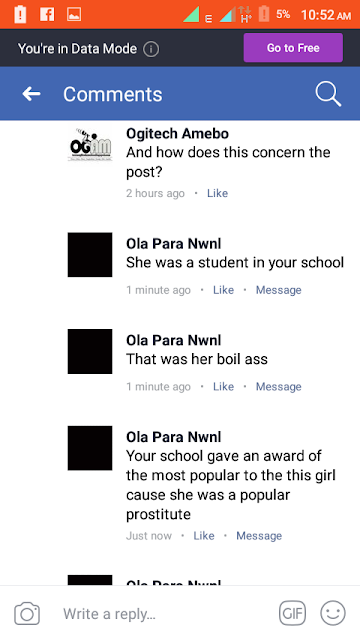 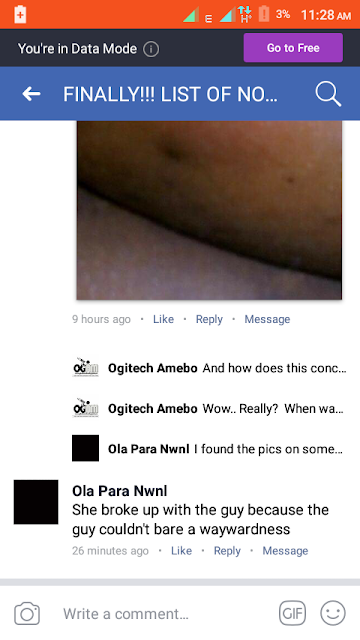 Surprisingly, we checked this so called Ola Para Nwnl’s profile but the first post we saw typed on his time line was RIP, then this gave us more urge to dig into the matter as a dead man cannot be posting on Facebook.

We sure made our findings and the truth has been revealed, one of our correspondence actually chatted with Adebimpe Ariyike Cares yesterday 17th December, 2017 and she said;
“well, that guy happens to b my ex, later on i discover that I am older than him n I call him to order, I gave him reasons of quitting d relationship. I never had any issues with him, I broke up with him with reasons which I believe he should understand as a mature guy, age doesn’t determine maturity, u can be a mini age n b wiser to that of maxi age,hope that is clear?”

“Ever since then I have been facing some kinds of mystery with him, he hacked my facebook account to msg any body with a male organ,acting like I am d person chatting with them, I change my password seriesly all to avail. he would abuse them, send fake pics to them using my account, I ought to have arrested him but I realised I am at fault, at least if we didn’t date he wouldn’t have that got to do that.

“So concerning the ass pics, a frnd of mine called me n told me because I have blocked him n I can’t see any post from him anymore ,that he posted an ass of a boil on Ogitech forum, I wasn’t surprised because I knew he was responsible for that n it’s because of that small age blood that runs tru his vein. that ass wasn’t mine, I don’t know where he got that from thank God I don’t have any naked pics with him that his how he will post it. That is y I don’t send nude pics to anybody be u who that person is to me. So please I want you to understand that,for a guy to do that,that means his jealous, can’t control his feelings, n he his immature.”

“Worst of his act, he msg a guy on my account of which that guy doesn’t have anything doing with me, we were just frnds on fb, telling him I am a bad luck I date guys to ruin there life sending my pics we took together to him that I am a married woman,u don’t get? He his chatting to that guy with my own person Fb account. D guy was surprised that what was i talking abt, he called me n send the chat to me. Honestly I am tired of it all. Love is not by force” 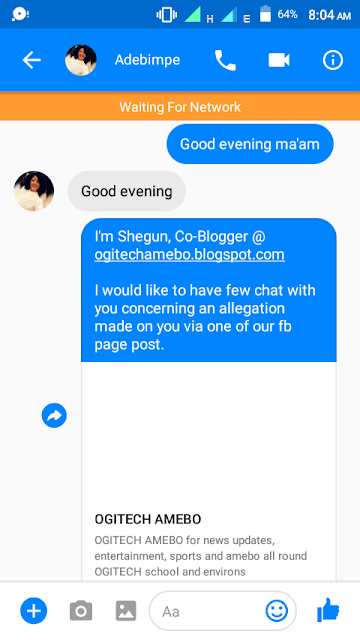 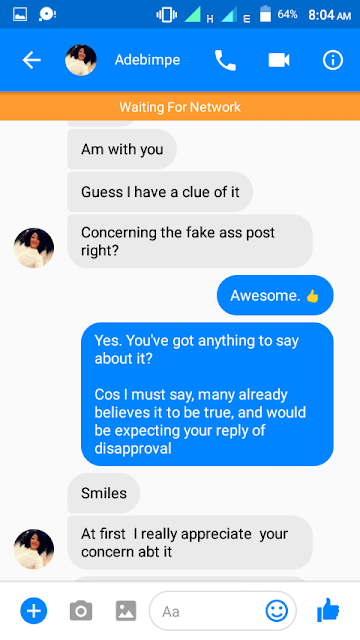 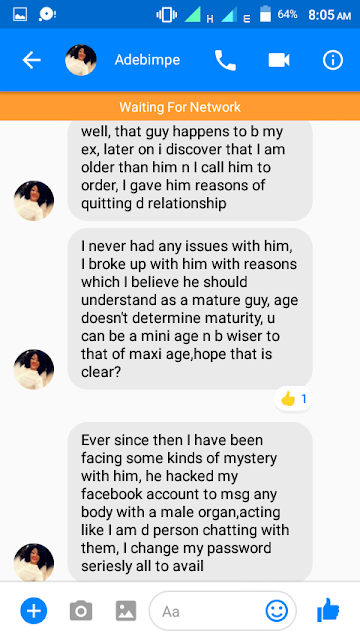 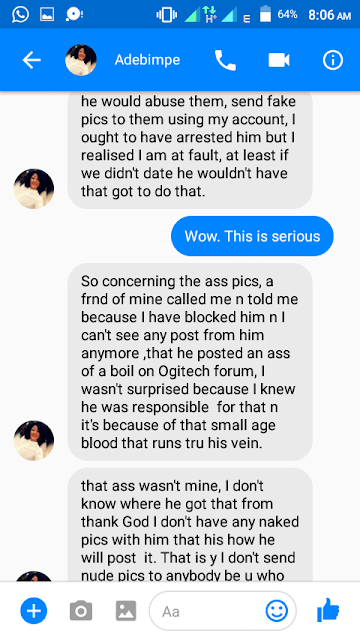 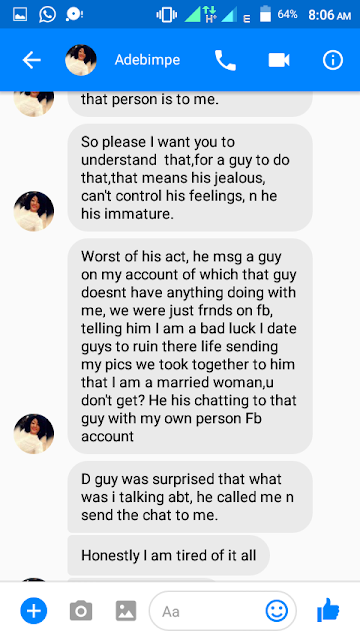 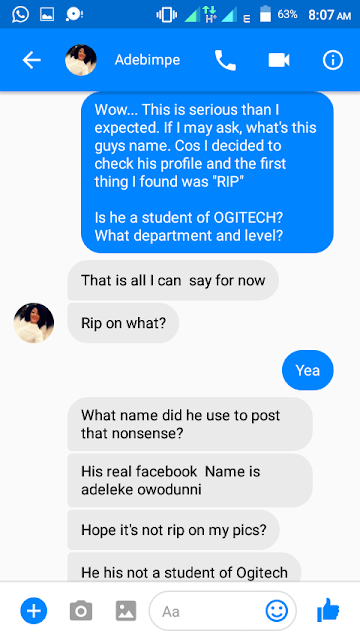 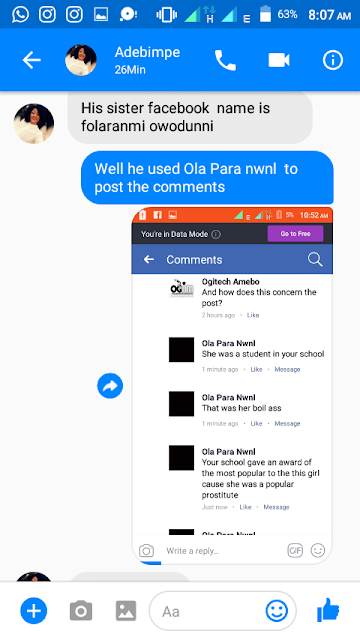 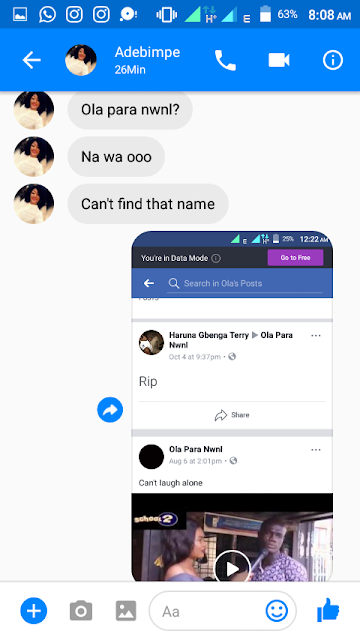 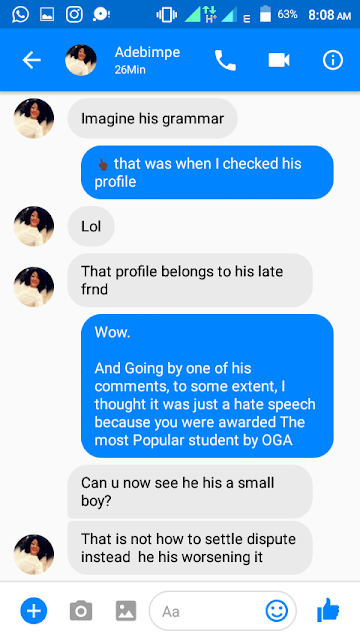 Adebimpe disclosed that his real Facebook name is Adeleke Owodunni and identified his picture after we checked his profile. 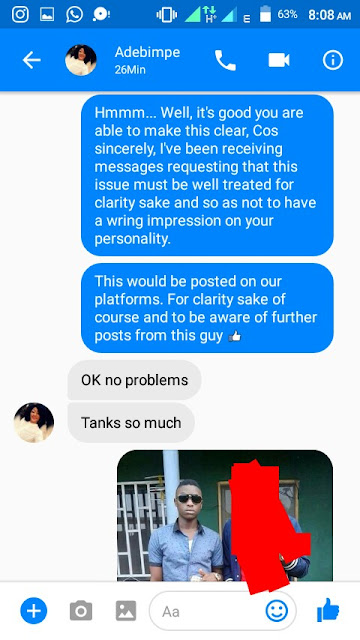 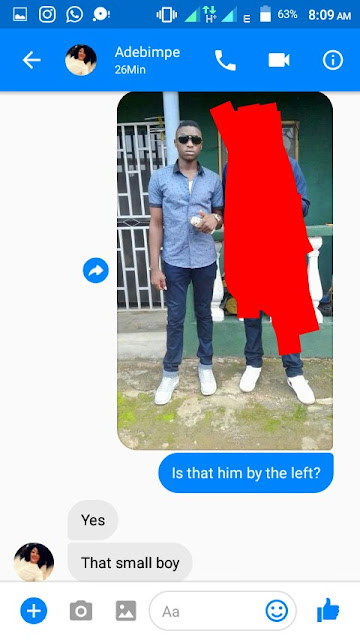 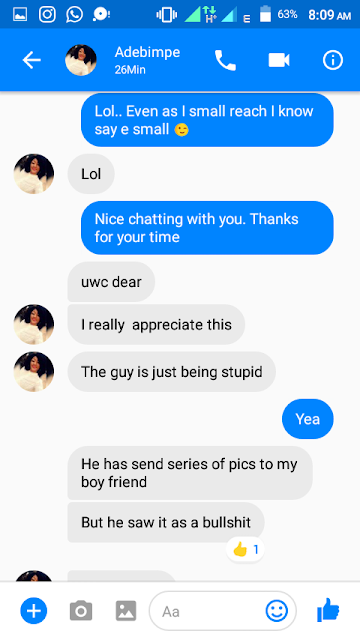 We actually confirmed this after checking Adeleke Owodunni’s profile and we saw one of his post on the death of Ola Para Nwnl– He posted his sympathy post saying RIP to our pal Tobi rabiu (Ola Para Nwnl). We love you so much on Nov 8 at exactly 2:31pm.. See screenshots below 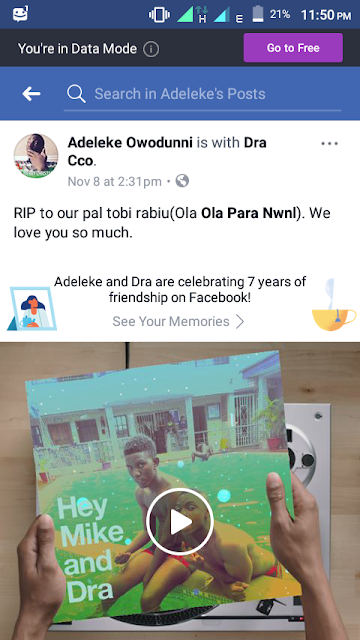