OGITECH should be the first to partake in the ASUP strike. – Mass Comm student explained

By: Amebo
In: Uncategorized
“ogitech should be the first to partake in the strike.”
This was culled from an impromptu interview conducted from The Public Relations Executive of Mass Communication Department (AMACOS) – GIDEON OLAYINKA BAJELA popularly known as KVNG_BADJETH. He poured out his opinion on the School’s rejection to partake in the ASUP Strike during a conversation in a group chat on how mass communication had not be well represented by the students of the department on Sunday 26th November, 2017 which eventually resulted to an interview hosted by one of our correspondents.

Below is a draft of the conversation. See screenshots after.
GIDEON: ogitech should be the first to partake in the strike.
OGAM: 😳

OGAM: Why please?
GIDEON‬: what equipment do we have in ogitech?
ogitech should seize this opportunity to channel their problem to the FG..
they even get mind sign paper say they no join strike..
nawa sha

OGAM: Can you buttress more on this before I listen to my church sermon please.
GIDEON‬: okay, ACADEMIC STAFF UNION OF POLYTECHNIC(ASUP)
have been asking something from the government from 2010 because the government has refused to pay their shortfalls and outstanding arrears.
the strike will enable the govt to meet the demands of the union or until an implementable memorandum is agreed on..

OGAM: Really? But don’t you think the school is as well considering the students career in this instance sir?
Considering what a strike like this had caused to school like YABATECH
GIDEON: it is also for our betterment…
a newsroom that doesn’t have padding…
a building completed without good toilets. Our school is a poor state polytechnic..
no hard feelings…

OGAM: If I’m not mistaken, what you mean is, OGITECH news room is not well equipped
GIDEON‬: yeah….
our plight must be heard

OGAM: Noted. But in the process if embarking on the strike, what if the strike extends to… Say 2 years. How do you think the students would react to this?
GIDEON‬: it can’t be

OGAM: The last one was almost a year sir. Imagine having an automatic extra year all in the name of strike. How would you react sir?
GIDEON: OGITECH AMEBO, come advertise in our newspaper for more publicity

OGAM: Lol. You have known OGAM for a while now same as many students in the school and other schools, I’m knowing you guys for the first time. You should be the one to advertise your paper on our blog.

We’ve got active social platforms too you know
GIDEON‬: ✔

OGAM: So @⁨KVNG_BADJETH🤴🏾⁩ back to our discussion, would you in your opinion say the school is being fair enough by not embarking on the ASUP strike?
GIDEON‬: partially.
they should at least justify their reasons for not joining the strike

OGAM: Ok. You made mentioned of the news room not well equipped and toilets not in the built building, do you think these would be provided for if OGITECH should embark on the strike?

Just few questions before I end the session please.
GIDEON‬: maybe our story would’ve been changed.

OGAM: So does it mean you regret the school not joining in the ASUP strike?
GIDEON: yeah!
but i think they have their own reason

OGAM: Ok @⁨KVNG_BADJETH🤴🏾⁩ it’s obvious you are not concerned about the number of years a student uses for his/her school program. But the facilities to be provided for by the school/government. What’s your take on this?
GIDEON: i am, but equipment should also be provided for better learning.

OGAM: Ok. Finally @⁨KVNG_BADJETH🤴🏾⁩ on the issue of providing facilities, what’s your advice to the school, the government and the students?
GIDEON: your interview is unethical sha o. anyways, the government should provide equipment for stability and easy learning..
while the students should not be swayed away just for academic purpose but also fighting for their academic rights.

OGAM: And the school?
GIDEON‬: the school should be bold enough to write down petitions to the state government.

OGAM: Anyways, @⁨KVNG_BADJETH🤴🏾⁩ thanks for the impromptu session, though unethical as you put it, but we actually found your plight worthy of being heard by the students, management and the government so this brief session with you would as a result be featured on our blog and social platforms.

Thanks for your time.
For: Ogitech Amebo
Adetubo L. Segun

_and by the way, what’s the name please?_
GIDEON‬: GIDEON OLAYINKA BAJELA

OGAM: God bless you sir. Thanks once again ✌🏿
GIDEON: alright🙌🏾

Screenshots of the conversation after the cut 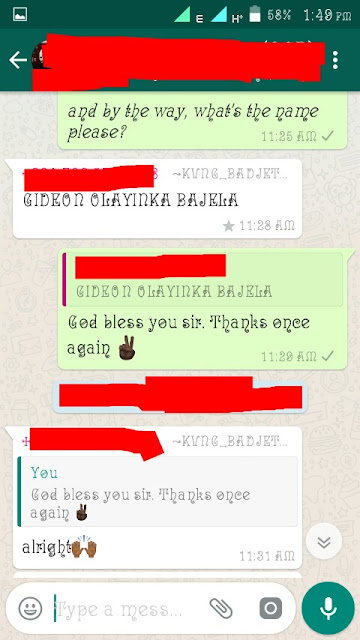 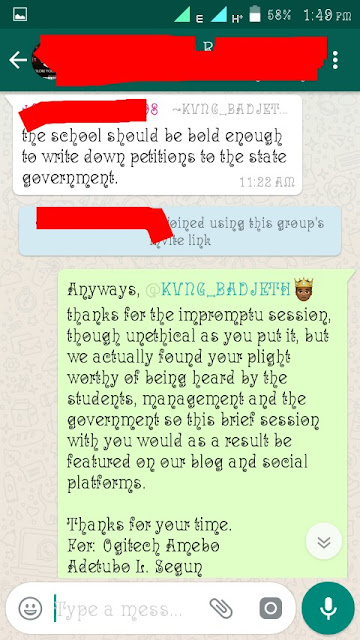 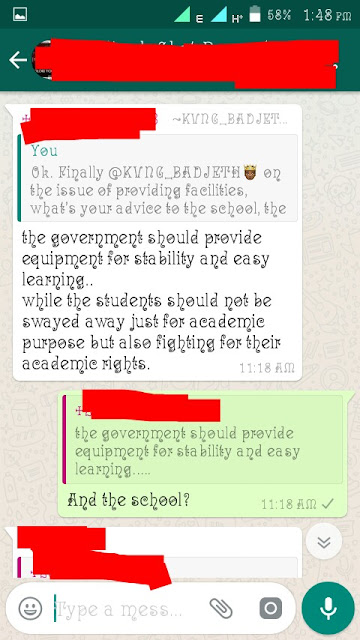 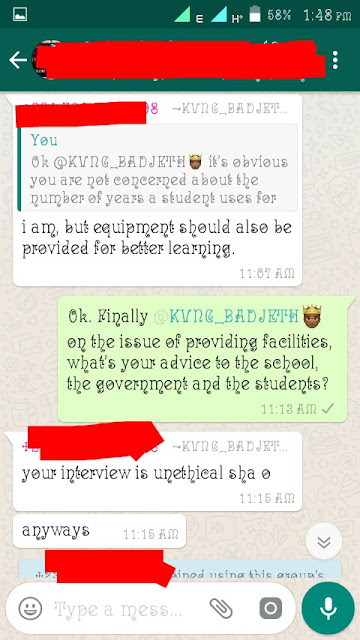 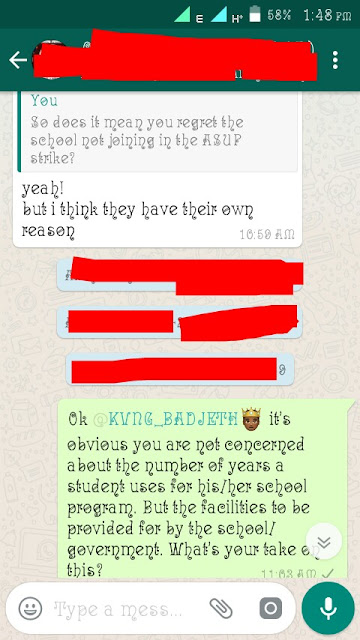 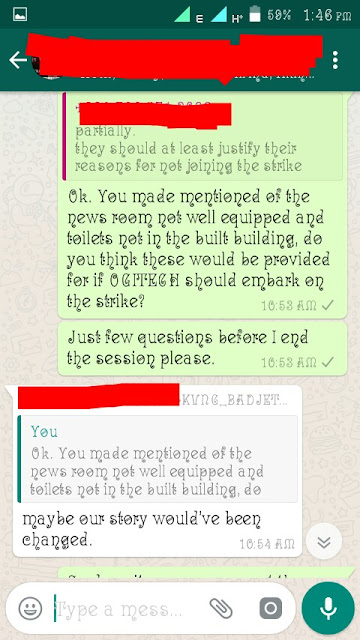 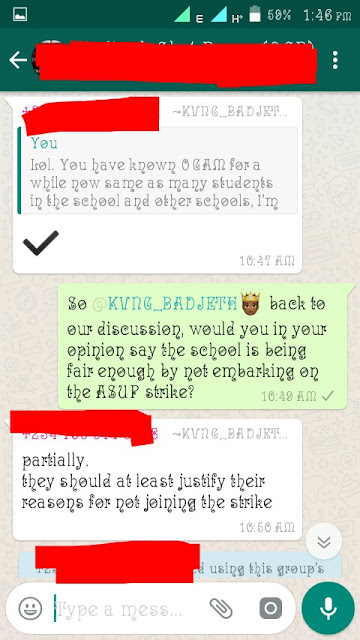 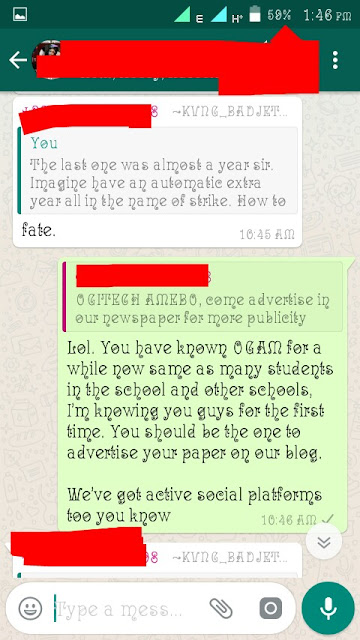 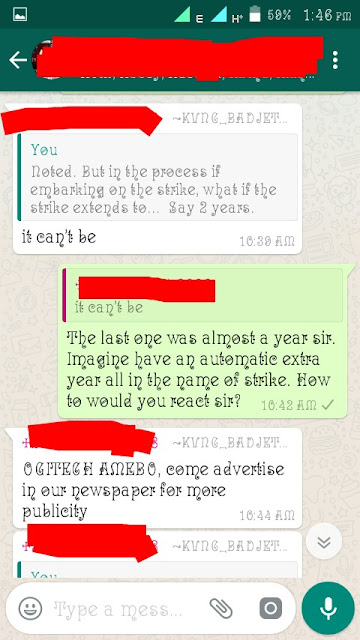 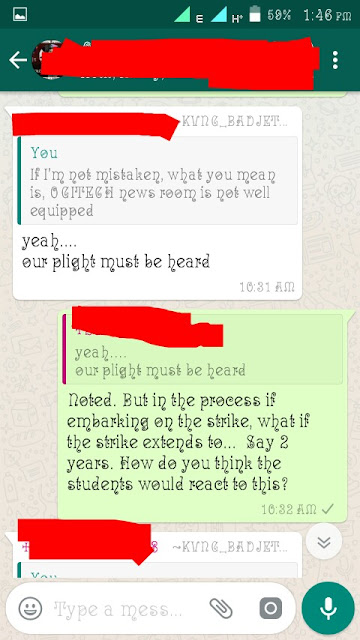 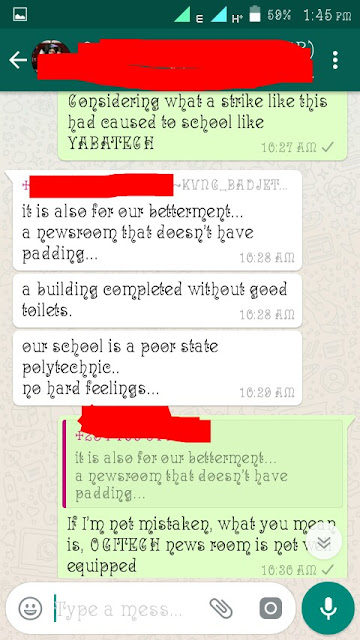 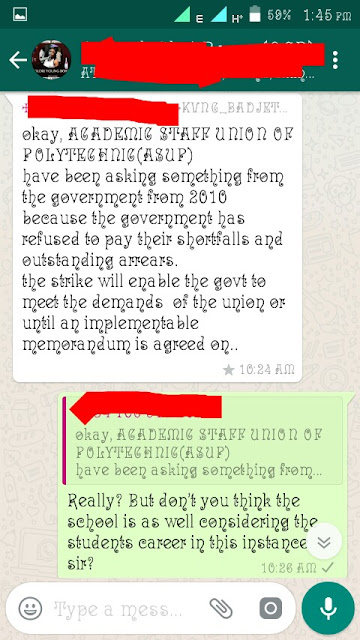 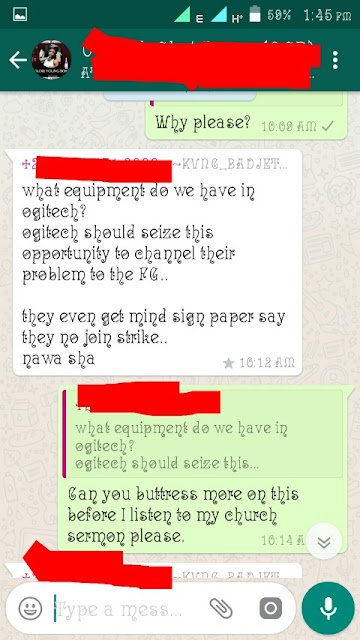 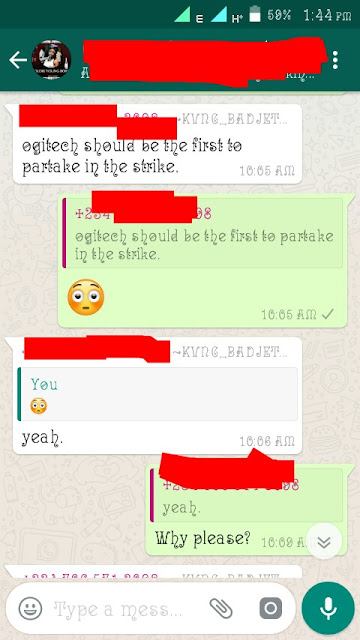 2017-12-01
Previous Post: Mathematics Graduate Of MOUAU Who Worked As A Bricklayer Shares His Story “This Is Why I Always Slept In Class”
Next Post: AMAZING MOMENTS OF THE EXPERIENCE 12 – CLIPS BY GR8 LYNCON